(Side note: it’s a topic that has been done to death, but the England national football team and the continued incompetence of those involved in the top positions of English football in general is something both of great interest, but also immense frustration. This lengthy article is my take on how everything is yet again feeling like Groundhog Day as we look forward to yet another international tournament.)

Oh, that wonderful time of the year in which everybody begins to get excited with the build-up to the World Cup in Russia. Football’s biggest festival is just under 3 months away and by now, the national team managers preparing for the trip to Russia are in the final stages of devising their masterplans for the ultimate goal of winning the trophy.

Well, seemingly everywhere but England. As early as it is, Gareth Southgate’s most recent England selection has been an absolute masterstroke in the art of killing any remote excitement there may be in the lead-up to the tournament (see also: England’s 2-1 defeat to Holland after beating Germany 3-2 in 2016). Whilst admittedly hampered by the absence of star striker and captain Harry Kane, the rest of the squad makes for largely grim viewing.

Admittedly, Nick Pope, James Tarkowski and Alfie Mawson receiving well-deserved maiden call-ups is a positive. As is the recall of Lewis Cook on the back of his recent good form with Bournemouth. However, this is where the positives end.

“I never pick on reputation — form has to come into it” – Gareth Southgate, 15th February 2017

That age-old soundbite and favourite of the international football team manager. An admirable sentiment, yet oh so rarely practiced as well as it is preached. In-form Brighton forward Glenn Murray was unjustly ignored, and judging by this Twitter post, it appears he too shares such sentiments. Instead, Murray (with 11 goals this season and 5 in his last 6 appearances) was overlooked for Arsenal’s Danny Welbeck, a man who has netted 3 times and has only found himself in the Arsenal team as of late mainly in the Europa League due to Alexandre Lacazette’s injury and Pierre-Emerick Aubameyang being cup-tied. “I’ve got to look at the players we believe can play at that level, who have done well for us in the past.” was Southgate’s justification.

And within that quote lies a major contradiction in Southgate’s decision-making regarding selection. Did he ever truly believe in stating he would choose on the basis of form? Or was such a statement merely made as a means of appeasing those following the England team, a group many asides from the FA and media figures didn’t even want in the hotseat from the offset after Sam Allardyce’s brief reign. Discussion over form aside for a moment, Welbeck’s inclusion appears to show a major lack of depth regarding forward players in Kane’s absence, with Jamie Vardy and Marcus Rashford being the only other options available for Southgate in the friendlies against Holland and Italy. The overlooking of Murray appears to be even more questionable considering the lack of forwards to turn to.

Even more puzzling was the continued inclusion of goalkeeper Joe Hart, who not only has been largely out of favour at West Ham, but has also turned out poor performances whenever called upon. Even more frustrating is the fact Hart has been included as part of a 4-man goalkeeping team, a decision which is simply needless and a waste of a valuable space for a more deserving outfield player at the current time to stake their claim to make the World Cup, especially with the other 3 keepers consistently outperforming him.

However, I suspect the likelihood is simply that Southgate will again ignore what he has said regarding form and continue to persist in playing Hart as his number 1. Whilst some will point to the fact Hart is experienced at international level, that excuse simply no longer suffices if England are to attempt to improve as a side and reverse the dismal run of tournament performances since 2006. If experience was the ultimate key to the makings of a solid international side, Southgate is as well bringing players such as John Terry out of international retirement. Of course, such an idea would be ridiculous to suggest now, as Terry no longer possesses the same ability he once had. The same applies for Hart, whose decline since 2015 appears to be terminal.

Similarly, the inclusion of Jake Livermore within the squad has boggled the minds of many across the country, including Livermore’s own West Brom supporters. The midfielder’s most notable role in his club’s miserable season has been his recent antics regarding the theft of a taxi in Barcelona, and has otherwise had a very poor season in a truly woeful side. Southgate’s justification for his inclusion is as poor as his decision to select him. Ashley Young’s selection is another frustrating choice by Southgate. Whilst Young may have been playing relatively regularly for Manchester United, he has been played as a left-back, and a far more interesting option in the form of Fulham’s teenage sensation Ryan Sessegnon has yet again been ignored. The idea Sessegnon is ‘too young’ is lazy when considering the inclusion of Luke Shaw at the previous World Cup.

Southgate’s backers have defended his selection and stated he is merely powerless when he has so few options at his disposal. Admittedly, this is true, the quality of English players playing at higher levels has declined in recent years, especially in comparison to the European superpowers such as Germany, Spain, filled to the brim with Champions League-quality players.

Many suggest this is the fault of the English clubs, who choose instead to import foreign talent, leaving the youngsters to rot on the bench and eventually fail to fulfil their potential due to lack of game time. Again, a largely true statement, but the idea that the clubs are to blame is a tired and lazy narrative. The reality is that the blame lies with those at the top of the game, the omniscient Football Association. The decision by the FA to facilitate the grand overhaul of English football in the creation of the Premier League and the vast amount of riches that have been poured into the game has been the main symptom of the English disease.

By making English football an impatient game of instant success and wealth-making, the ability for clubs to be able to slowly build their sides up of young up-and-coming talent in the style of Germany and Spain or that of a struggling NBA team has now been eliminated. Financial rewards within the Premier League have forced clubs to favour short-term goals over long-term planning in fear of being left behind by rivals, and it is that which has denied youngsters the opportunities many of their counterparts abroad have received.

This will likely never change any time soon. Even with the recent successes of the England youth sides, very few of those who were crucial to the success of those sides will ever progress to the starting XIs of their sides. Similarly, successful club youth side players such as Chelsea’s have consistently struggled to make the grade before eventually being shipped off abroad, to lower-level sides in the top flight or even dropping down divisions. The inevitable consequences are that the national team has, and will continue to suffer due to this ‘watering-down’ of talent available.

Those circumstances are beyond Southgate’s control due to the damage being beyond repair, and in all truth, they are circumstances which he never should have been forced to deal with as England manager to begin with. His initial decision to avoid throwing his hat in the ring for the role after the calamitous Euro 2016 campaign speaks volumes over how ready he truly was to take on such a task. Only once Sam Allardyce resigned in October of the same year did he go for the job. Regardless, the FA must have been filled with glee that he was making himself available to make the step up from the Under-21s rather than going for either a foreign import or paying a large fee for an already employed manager. No doubt, Southgate’s inoffensive squeaky-clean and polished PR style must definitely have appealed to them far more than Allardyce ever likely did.

Yet despite the willingness of the FA to appoint him, and large sections of the footballing media backing him, many supporters have never taken to his management, or indeed him in general. They view him just as they did Roy Hodgson: as a FA ‘yes man’, simply persisting with the same methods used in the past when they desperately cried out for a major overhaul.

Critics will rightly point to his failures as England Under-21 manager, and even his tenure at Middlesbrough ending in relegation from the Premier League in 2009. It is fair to say that his appointment was questionable, but people would always be willing to change their mind if they provide reasons to be cheerful if they are there to be seen. However, much like how supporters view him, performances so far under him have been far from from inspiring.

From the dull to the downright abysmal, Southgate’s reign has so far been eerily similar to Hodgson’s, with many genuinely struggling to get behind the team with any form of optimism. Despite what some writers have led us to believe, Southgate, like his predecessors have failed to find a true identity for his team, merely mimicking the passing style of Spain’s golden generation side of 2008-12 poorly, which has only helped to further portray the side as cautious, safe and boring. But for the customary easy qualifying group England always seem to end up in (and then sugarcoat the abject performances by qualifying), there is no guarantee they’d have even made it to Russia against stronger opposition.

Then again, every England manager has struggled to generate any excitement through performances since the 2006 World Cup side, so maybe this isn’t altogether too surprising, most are used to it. The more worrying aspect of Southgate’s reign is the fact questions over who should be in starting XI by the time the World Cup comes still exist, and they are questions even the manager doesn’t seem to know the answer to. There have been numerous chops-and-changes to the starting XI and squads. Various experimental lineups resembling Hodgson’s final year as manager show this side is nowhere near ready to even remotely compete. In some aspects, England may have been better served failing to qualify and hopefully rebuilding a team at least better than the current crop.

But we shouldn’t be shocked these issues are arising again, they will repeatedly raise their heads over and over again due to the FA’s sheer incompetence. Appointing a man ill-qualified for the job was never going to solve any of the national team’s lengthy list of issues, and they will most likely aim to appoint another cheap and under-qualified successor when Southgate eventually leaves, be it after the seemingly inevitable round of 16 exit (news reports appear to suggest he will remain regardless of performance) or later. Nor will any pitiful measure that the hapless authorities will attempt to introduce to adversely affect English football even more than they already have done (ahem, Checkatrade Trophy, winter breaks, proposed B-teams etc.).

Not one of these schemes will help to fix the problems they have caused for the national side without a complete overhaul from within, or even better, a complete disbandment and start again. The current incumbents are filled with those out-of-touch and left behind by the game decades ago and those who know nothing about the game at all. Until the FA is destroyed in its current form, we’ll be seeing more posts like this being written for many years to come before we ever see any describing any international successes England ever has again. 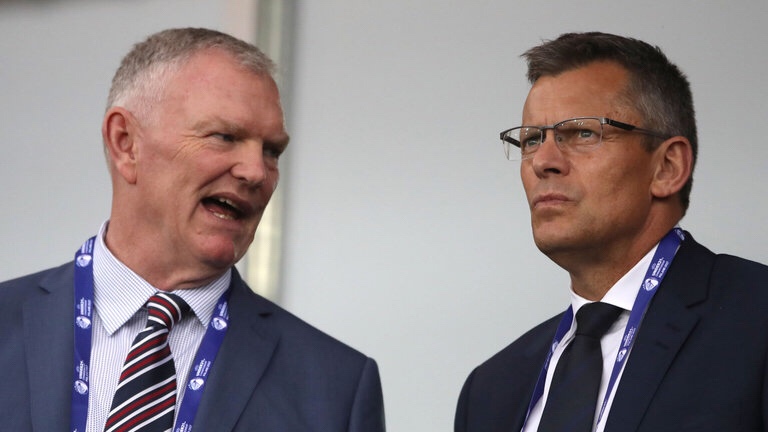