A Late goal from an unlikely source in Winston Reid was enough for West Ham to get past struggling Sunderland. 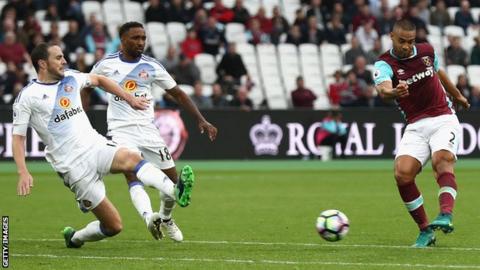 In the opening stages West Ham dominated. With Sunderland finding it difficult to get out of their own half. Fantastic football was being played by the hammers with Dimitri Payet and Manuel Lanzini linking up with attractive, skillful play. Big shouts for a penalty were waved away by referee Bobby Maddley when it appeared Winston Reid was wrestled to the ground by Javier Manquillo.

Then Dimitri Payet created a good chance for himself. As he ran rings around the Sunderland defence with some skillful footwork then striking the post when one on one with goalkeeper Jordan Pickford.

After the first half there was a feeling of when West Ham will take the lead not if.

However, As the second half began Hammers fans became increasingly frustrated. As their side struggled to create many clear-cut chances despite their flair play and possession. Sunderland had a great chance to take the lead as Wahbi Khazri went through one on one after Steven Pienaar's deflected through ball. Khazri only produced a tame shot straight at West Ham goalkeeper Adrian.

Simone Zaza went through one on one moments afterwards through Ogbonna's left footed through ball. His poor touch and lack of pace meant he lost possession to the last defender O'Shea. Zaza looking increasingly out of confidence and form. Slaven Bilic must be tempted to drop him as that's now his seventh game for the club without a goal or assist finding life difficult in the premier league following the move from Juventus.

Sunderland's organised defending looked as if it was enough to secure an important point away at the London stadium. Not until Payet's short corner caught Sunderland's defence out. As the ball fell to Reid whose smart turn and then left footed shot left Pickford flat-footed and went in the corner of the net. Giving the hammers the deserved three points.

Sunderland seemed over reliant on their talisman Jermaine Defoe. Who did look a threat to West Ham's defence when given the brief opportunities. Their lack of creativity and switching off at the end in a vital time in the contest proved costly. It does make you wonder if they are good enough to stay in the league.  The result leaves the black cats five points adrift from safety which is worrying, especially considering they are still without that first win of the season, sitting rock bottom of the league.

For West Ham they remain in 15th place. They will be very happy to secure back to back wins for the first time this season especially after all the controversy they were having previously at their new home.

West Ham fans, are you now optimistic regarding your season? Sunderland fans, are you destined for the drop? Let us know in the comments below!