VAR at the World Cup: An Early Verdict

The World Cup sees the world’s greatest players, coaches and teams come under scrutiny from pundits and supporters from every nation.  However, this year one group of people has faced more coverage than any other. Video Assistant Referees have been included in the tournament for the first time, and have unsurprisingly been the subject of much debate in the first round of fixtures.

The use of VAR has divided opinion, with some pundits heralding the help it has already given referees, while others have criticised its inconsistent use.  Arguably this is evidence enough that the technology is a work in progress, as one of the main reasons it was brought in was to reduce controversy so that quality football could be appreciated rather than constant debate about refereeing decisions, so the fact that VAR has been controversial shows it is not the finished article.

Half-time analysis on both the British television channels with World Cup coverage invariably focuses on whether various decisions might have been overturned by VAR, usually ending with pundits shouting ‘clear and obvious’ at each other until the second half kicks off.  Much has been made of the application of VAR during England’s opener against Tunisia, both of the decision not overrule the awarding of a penalty to Tunisia for a soft Kyle Walker challenge and the officials appearing to ignore some ‘enthusiastic’ marking techniques on Harry Kane at the other end.  If the aim of VAR was to eliminate controversy from the World Cup, one could not reasonably call it a success thus far.

However, those in charge of the competition will be quick to tell anybody who will listen that the introduction of VAR was not designed to end controversy around refereeing decisions.  If it had been, its use would not have been restricted to four key areas: goals, penalties, straight red cards, and mistaken identity. Rather than eliminate ambiguity, the technology is simply supposed to prevent countries being blatantly victimised by the decisions of on-pitch officials.  This has allowed important interventions from the VAR control room such as reversing the decision not to give a penalty to Sweden against South Korea for what can only be described as a clear and obvious foul in the box.

Unfortunately the rules and regulations regarding VAR at this tournament do not seem to have been especially well understood by many of the players and managers, who are frequently seen demanding that the referee uses VAR whenever their team isn’t given a decision, whether or not it fits into the four categories in which it can be applied.  One might even go as far to say that the VAR sign has become the new invisible yellow card. Realistically, VAR was never going to solve all of football’s problems, and in the majority of cases it has been as successful as could be expected at such an early stage. 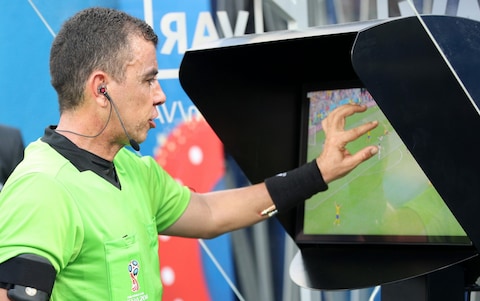 After one week of VAR at the World Cup, the jury is still out.  It has helped referees overturn some significant errors, but its use has not been beyond criticism.  There is certainly room for improvement, not least greater efforts to ensure that the viewing public - both inside and outside the ground - know what is going on.  My verdict on the new technology thus far is that it has improved the competition but there’s still room for improvement. The World Cup has been better with VAR than it would have been without it, but there is still work to be done.