After a miserable winter, Riyad Mahrez believed his one chance to join the Premier League champions had dissapeared in January, well, his luck has changed as Guardiola is still a keen suitor of the Leicester winger and a deal of up to £75 million could be completed by the end of this week, as reported by ESPN Football. 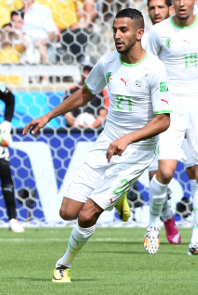 Mahrez is currently out on international duty with Algeria

The Algerian international, 27, has been well sought after Leicester’s heroic title winning season back in 2016 as the tricky winger notched 17 goals and 11 assists as he won PFA Players’ Player of the Year as well as Algerian Footballer of the Year.

Back in January, Mahrez missed out on a move to the soon to be champions of England which saw the player take a break from Leicester City and hand in a transfer request as he wasn’t happy the move couldn’t be agreed with the Foxes, who are thought to be more lenient in letting him go this time round.

Eventually making his way back into the fold, Mahrez, scored 12 goals to help newly appointed manager Claude Puel side to finish at a very commendable 9th place after a rocky start under Craig Shakespeare.

Mahrez will not be taking part in the World Cup this year, but the fan favourite at the King Power will certainly be missed by all at Leicester City with his unbelievable season which saw him win his only Premier League winners medal to date and they will be sure to give him a good reception whenever he returns.

Do you think Mahrez will be a success at City next season? Let us know by commenting below or by tweeting us @AllOutFootball_ with the hashtag #AOF.