ROSS BARKLEY ensured Chelsea’s unbeaten start to the season continued by equalising with virtually the last kick of the game to snatch a point against Jose Mourinho and Manchester United.

That however, did not tell the whole story as both benches were involved in a touchline scuffle after Barkley’s goal. A member of Sarri’s coaching staff goaded Mourinho after the goal and caused a heated exchange as security staff and members of both benches got involved to defuse the situation.

Mourinho being held back by his staff (trusted news.com)[/caption]

Jose’s men looked set for what would have been a superb victory over his former employers as a brace from Anthony Martial turned the game on its head after Antonio Rudiger put Chelsea ahead in the first half.

The disappointment from Mourinho was clear when Barkley equalised as he bowed his head and sunk in his seat. Chelsea’s technical assistant Marco Lanni got a bit carried away in the celebrations jumping past Mourinho and then coming back past him again this time fist pumping right in front of the United boss who then tired to get down the tunnel after Lanni but was held back by security and Manchester United staff.

At the end of the game Mourinho went over to the Manchester United fans to applaud them for their support and responded to taunts from the Chelsea fans by holding up three fingers signalling to the Chelsea fans of the three Premier League titles he won while in charge of the London club. 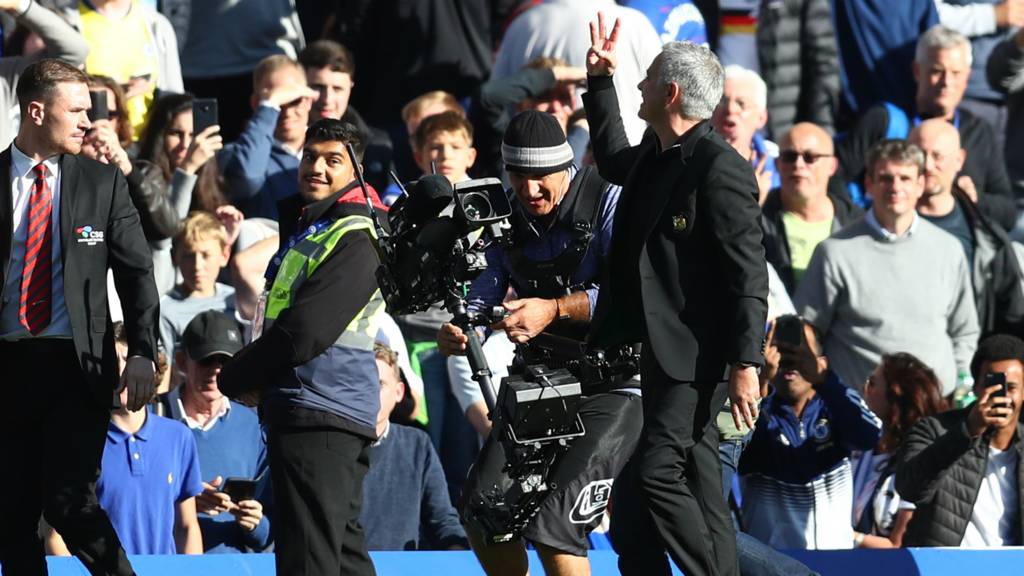 Ross Barkley dropped to the bench for Chelsea with Kovacic coming back in to the stating 11, Alvaro Morata also came in to the startling line up replacing Oliver Giroud.

Jose Mourinho made two changes to the side that beat Newcastle. Victor Lindlelof and Juan Mata came in to replace Eric Bailly and Scott McTominay.

United started well and were compact but poor marking from Paul Pogba meant Antonio Rudiger was left all alone to power home a header from Willian’s corner to give Chelsea the lead. Chelsea had a great chance to make it 2-0 when Kovacic’s ball over the top came to Marcos Alonso who was onside but a bad touch saw the ball go through to David De Gea.

The Blues had another chance to double their lead but failed as Alvaro Morata couldn’t make good enough contact with his shot from just inside the box.

That miss would come back to haunt Chelsea as United, who had not registered a shot on target in the first 55 minutes would find two in under a minute that would see them pull themselves right back into the game.

Juan Mata saw his shot powered away by Kepa before crossing the ball back in, it reached Ashley Young who then fizzed a cross into the Martial who finished superbly from 10 yards to draw United level.

David Luiz then glanced a free header wide from a Willian free kick before Ngolo Kante drew a fine save from De Gea.  United then broke and took the lead. Some great work from Juan Mata down right hand side saw him break free, he found Rashford who then sent in a perfect ball for Martial who curled home an effort into the bottom corner to give Jose’s men the lead. Martial celebrates in front of the United fans (Indian Express)[/caption]

United looked set to take all three points back to Manchester but they were unable to after Barkley struck in the sixth minute of added time. First David Luiz’s powerful header came off the post before Rudiger’s follow up was brilliantly saved by De Gea, before Barkley couldn’t miss from close range. That sparked the scenes on the benches before calm was restored and both managers shook hands at the end of the game.