The race for La Liga- Who will come out on top?

This seasons battle for La liga is the tightest for years. With three teams battling out for the title , each having a realistic shot at lifting the trophy in May, this season's run-in will certainly not disappoint. With just four points separating the front three, who knows how this season will end up.

As you can see Barcelona are impressively undefeated against their challengers, and recently secured a huge 2-1 win away at Atletico Madrid. Barca are currently on a run of sixteen games unbeaten, which leaves them a point clear at the top of the table. However, their arch rivals Real Madrid do have a game in hand over them, which if they win would result in a two point clear margin for Real. Although on the other hand it may seem strange because of Real's game in hand but fate is still in Barca's hands. This is because on Sunday 23rd April it is Real Madrid vs Barcelona, which for me and I'm sure many others feel as if this game will decide who lifts the trophy. It's incredibly hard to look past arguably the greatest attack of all time, scoring a league high 76 goals in just 26 games and they have conceded just 21 goals this season, only second behind Villareal, which gives them a far superior goal difference in comparison to others (+55).  Which what this intriguing battle for La Liga, may come down too.

Up next: 12th March (A) Deportivo La Coruna

Just like Barca, the fate is still in Real Madrid's hands despite failing to wrap the league up. At one point it seemed inconceivable for Real Madrid not to lift the trophy but it's become harder than expected in recent weeks for Zidane's galaticos. The historic record-breaking unbeaten run of 40 games has now been long forgotten and it seems big questions are being asked of the Madrid legend in charge, after their recent poor run of form. 7 points out of a possible 12 is not title winning form, especially against the caliber of opposition; losing away at a poor bottom half Valencia side and then again at home to Las Palmas, has resulted in the door opening to their title challengers. However, as much as you focus on their recent run of form, the fate is still in their hands with that game in hand against relegation fighters Leganes, after that they are then at home to each of their other three title challengers. This means they are the bookies favorites to lift the trophy.

Sevilla have certainly been the suprise package in this years competition. I can't imagine many punters before the season predicting Sevilla in mid march to be just four points behind the leaders. Unlike the other three title challengers Sevilla don't have that star player that stands out on the team sheet, they don't have anyone who can compete in star power against the likes of Messi, Neymar, Suarez (Barcelona) or Ronaldo, Bale, Ramos (Real Madrid) or even a single talisman like Antoine Griezmann (Atletico Madrid). Their top scorer and best player is the very promising prospect that is Wissam Ben Yedder, (who many may of never heard of) he has found the net 9 times this season and contributed 2 assists for his team. I personally feel that this shows a great example of the achievement Sevilla have accomplished, because with all due respect to Ben Yedder, the other players mentioned before have scored that many goals in three or four games (bar Sergio Ramos). 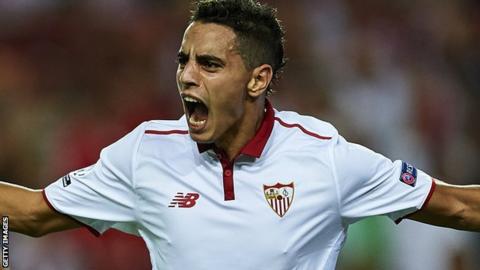 So this begs the question of how have they got to the position they are currently in. Well you can look no further than the manager Jorge Sampaoli who has maximised the potential of the players at his disposal and has created an organised and balanced side that has picked up big results against Real Madrid and Atletico. The work Sampaoli has achieved is remarkable, especially considering the summer departures of previous important players like midfielder Krychowiak to Paris Saint Germain and also striker Kevin Gameiro to Atletico Madrid.

The role of Atletico Madrid:

Diego Simeone's men have endured a difficult domestic campaign, seemingly out of the title race in March 11 points behind the current leaders. Their domestic aim will be to finish in the top four which shall not be an easy task because Real Sociedad are just a point behind them in 5th place. Therefore, every game is a must win for them because finishing in the top four is essential for Atleti. As a result of this, Atletico Madrid may just decide who goes on to win the La Liga trophy in May because they still have to play two of the three teams involved. Maybe you should set a reminder in you're phone for that key date of the 9th April for the Madrid derby where Atletico will certainly hope to enjoy beating their arch rivals Real and therefore ruining their title dreams.