The defending champions will have their work cut out for them in the upcoming 2018/19 Premier League season. Off the back of a record-breaking season under the guidance of Pep Guardiola, Manchester City have set their bar very high and fans will have huge expectations for this team ahead of the new season. Riyad Mahrez was the only signing for them this summer and it appears that it may well be the only one that Pep desires, he's kept his squad together and his players will be determined to achieve some continental success this year as well.

Manchester City broke a host of Premier League records when they comfortably won the league last season including most points (100), most wins (32), most goals (106), most consecutive wins (18), biggest gap to second place (19pts), and many more. Although they secured the Premier League and League Cup last year, they were disappointed by their Champions League quarterfinals exit against Liverpool and will surely be hoping to win the whole competition this season for the first time in their history. 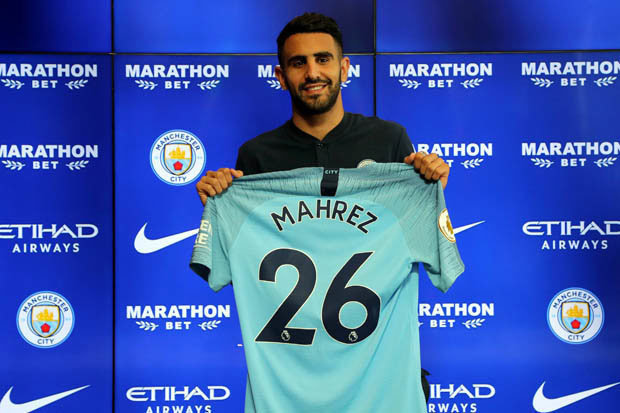 Pep Guardiola was rather quiet in the transfer window and even with a massive £60 million signing of Riyad Mahrez from Leicester, their squad really hasn't changed much except for the departures of a list of youth players and Yaya Toure. Guardiola was heavily criticized for his mass spending in previous seasons but it appears it had a purpose. He now has the squad that he wants and he'll be looking to work with these players for years to come. His style of play is focused around playing out from the back and he needed the right players to do this. Some of those were already at the club but even those players had to adapt their style to suit his. The likes of David Silva, Kevin de Bruyne, Kyle Walker and Ederson are vital to his game plan and now that he has them, he'll continue to develop them.

The acquisition of Riyad Mahrez could be more problematic for the other teams than they imagine. It appears to be a typical big club signing, where they just see a talented player and will pay anything to have them on their team even if they don't play much. However, I think this is different and that Mahrez will have a huge role in Manchester City's upcoming season. It may well be true that he doesn't start every match but the creativity and skill that he showcased at Leicester has allowed him to become a very versatile midfielder. Guardiola will have the ability to deploy him in a central midfield role or play him out wide, and his playmaking instincts are similar to those of De Bruyne and David Silva. He can have a huge impact off the bench and change games but also start in the congested periods of the season and provide goals and assists from the first minute.

Despite, all their strengths though, Manchester City still lack in some areas of the pitch. I'm surprised that Guardiola didn't make any defensive signings or even a defensive midfielder. After missing out on Jorginho, Fernandinho will be expected to play again this season in the holding midfield role and the error-prone defence may cost City. They conceded the least amount of goals last season but their defence was exposed in the big games which will be more important this season. Last season they experienced defensive chaos in the second Manchester derby, conceding three goals in 15 minutes and also against Liverpool when they conceded three goals in 9 minutes. These problems will be costly in the upcoming season and Pep's reluctance to improve his unstable defence could be a major issue for him. However, with that being said, his midfield and attack will still be good enough to win games alone. Bernardo Silva was brilliant in the community shield and Pep was full of praise for the winger. Manchester City will now have to learn to trust Guardiola as he may have to change his tactics slightly this season as teams are beginning to understand his weaknesses.

Overall, I think Manchester City won't necessarily be a worse team this year but rather the teams around them will be significantly better. They will have more of a challenge on their hands this year and may well shift their focus from the Premier League to the Champions League as they continue to chase after their first European triumph. Other sides will adapt to City's tactics and be more equipped to counter them this season which will make Pep's job very difficult but he has proven himself more than once but City fans should remain confident that they can collect some more silverware this season. Let us know your thoughts and predictions for the reigning Champions by tweeting @AllOutFootball_ using #AOF.