Denmark are off to a winning start in Group C after a nervy and below par 1-0 win over Peru. The Danes were fortunate not to be 1-0 down at half time as Peru were awarded a penalty just before the break but  Christan Cueva ballooned the ball over the bar in what would prove a costly miss. 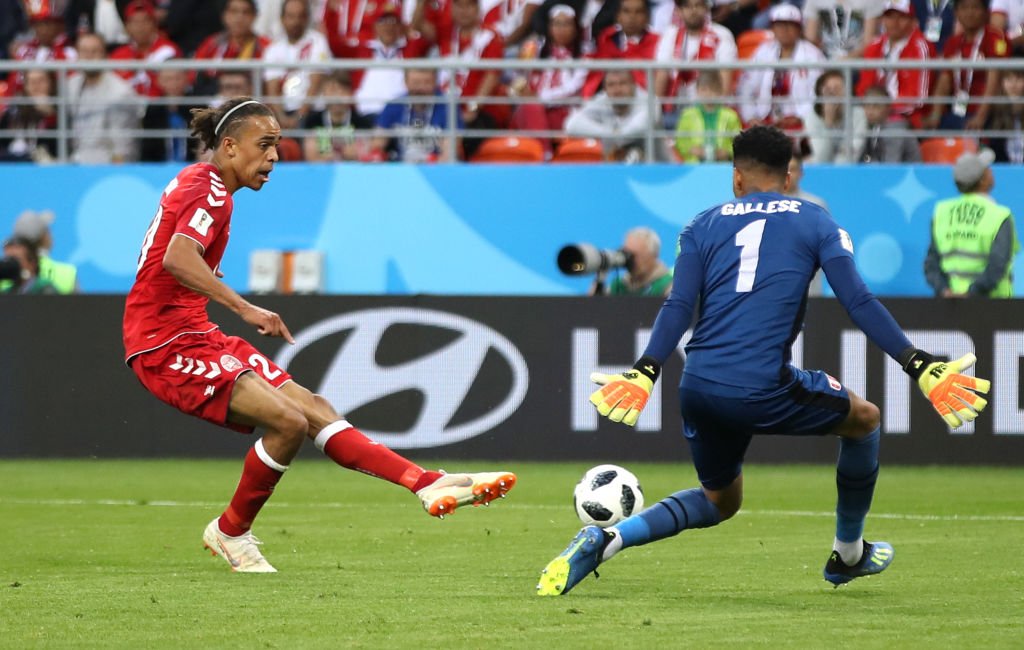 Peru started the better, getting the ball into wide areas and that caused problems for Denmark after just two minutes as the ball was whipped in Flores went down inside the box but a penalty was never going to be given. Denmark also had an early opportunity with Jorgenson getting free and trying to deliver but Christian Cueva cleared it as there was plenty of space in opening stages.

Peru continued to be on the offensive early on and after a poor kick from Kasper Schmeichel the ball  came out to Yoshimar Youtun who struck from 35 yards straight at Schmeichel. Edison Flores then tried his luck from 30 yards but saw his effort blaze over. Schmeichel was called into action again to deny Andre Carrillo who cut in well before letting fly with his left foot.

Anyone would have thought Peru were regulars to the World Cup with the way they started, lots of energy and pace and getting up the pitch quickly. Andreas Christensen did brilliantly to dispossess Luis Advincula who was leading a counter attack. 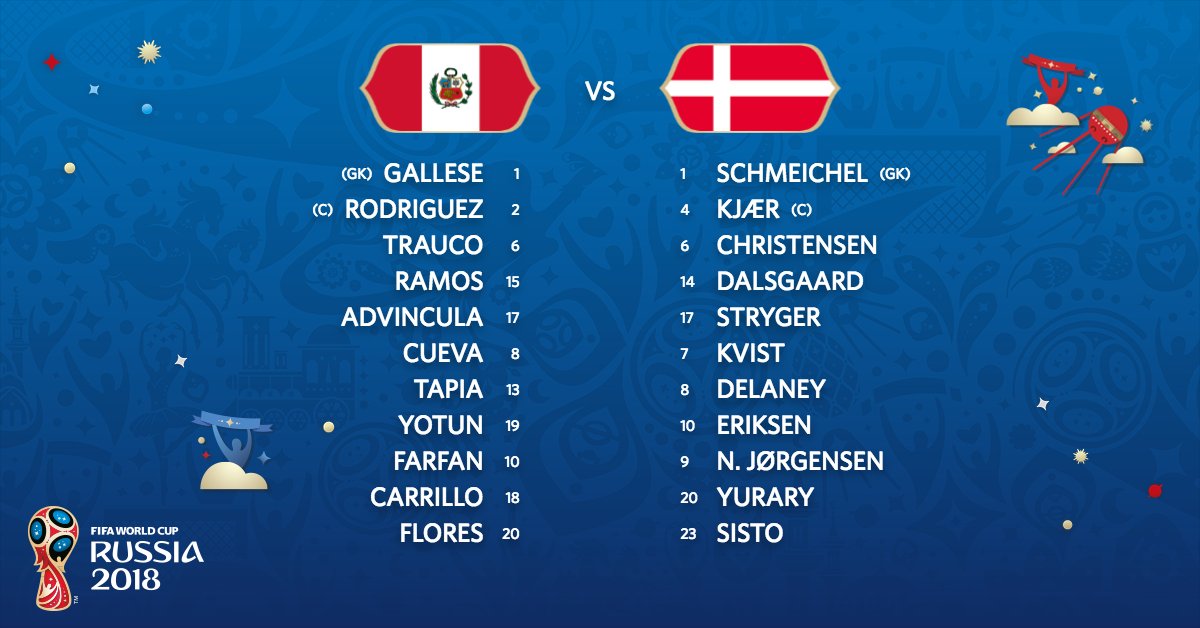 It took Denmark 20 odd minutes to settle down and come into the game as they forced back to back corners and saw a shot from Delaney fly over.

Shortly after that the games first big chance game as Carillo played a ball in behind the Dane defence for Jefferson Farfan and he was denied by a super block from Simon Kjaer. William Kvist then had to be taken off on a stretcher after taking a knee in the ribs from Farfan and he was replaced by Lasse Shone.

Denmark then had their best chance of the game when Sisto ran at the Peru backline and was brought down 19 yards from goal, Eriksen took the free kick which hit the wall before Shone hit the ball straight at the keeper. Three minutes later Delaney drove a half volley across goal but Poulson couldn’t reach it.

Just minutes later there was drama as Carrilo went down in the box, the referee said no before looking to VAR, he then changed his mind and awarded the penalty but Cueva blazed it over the bar and the sides went in level at the break.

Denmark started the second half the better side and stroked the ball around a lot better. They won a free kick which Eriksen took and delivered poorly allowing Peru to clear, moments later it was them on the attack and Advincula raced away and found Cueva and the ball broke to Flores who slipped at the vital moment.

From that attack Peru are caught with too many upfield and Denmark take the lead, Eriksen had space with runners ahead of him, he found Poulson who then calmly tucked the ball past the keeper at the near post to give the below par Danes the lead.

Peru responded brilliantly and with 62 minutes on the clock made another chance, Flores played in a low shot across goal which Schmeichel saved well. Another chance followed as Rodriguez’s header just evaded Farfan at the far post. Advincula curled one straight at Schmeichel a minute later.

Peru went close again on the 79th minute Cueva did really well and found Guerrero who had his back to goal and tired an outrageous back heel that went just wide as Peru continued to look for an equaliser, and they almost got it the Carrilo got away down the wing and pulled it back for Farfan who saw is shot saved by Schmeichel.

Eriksen nearly rapped up the game for the Danes when put through 1 one 1 but was thwarted by the keeper as the Danes held out for a crucial win to start their campaign with a win.

What did you make of the game? Were the Danes lucky? Let us know by commenting below or tweeting us at @AllOutFootball using the hashtag #AOF.