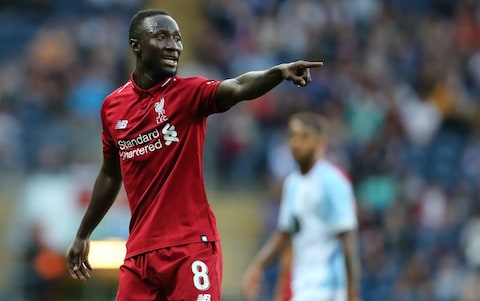 Naby Keita arrived at Liverpool this summer after agreeing a move last season and has now admitted that he turned down offers from Barcelona and Bayern Munich to come and work with Jurgen Klopp at Anfield. According to Goal, the Guinea international was confident that a move to the 2018 Champions League finalists was the right one for him.

The 23-year-old was heavily sought after following his 2016/17 season with Red Bull Leipzig and in the summer of 2017, Liverpool agreed a deal worth up to £48 million for the midfielder. Now, he's set to line up in red alongside fellow French-speaking midfielder Fabinho and skipper, Jordan Henderson.

Image Credit: This Is Anfield

"It's true to say that there were other teams involved like the ones you mentioned...But a big part of my decision was the role of the coach", he said, "We had good conversations. The words he spoke to me about this project really convinced me. I could see how the club was developing and I spoke at length with Sadio [Mane]."

Jurgen Klopp has previously been hailed for his brilliant signings such as Mohamed Salah and Andy Robertson but it was the Senegalese attacker who helped with the negotiations.

"Sadio is like a brother to me. We had nine months together at Salzburg and built up a good rapport. We have been great friends since that time. He told me what a great club this was and how the team was progressing and had great potential."

Naby Keita seems to be enjoying life so far in Liverpool under the guidance of Jurgen Klopp and now working alongside Sadio Mane, he should be set to have an exciting debut season for the Merseyside club. He was handed his debut in the 7-0 friendly win over Chester and recently put in a brilliant performance against Blackburn Rovers, linking up with Daniel Sturridge to provide an assist.


So Liverpool fans, what are your thoughts on Keita's comments? Does it surprise you that he turned down those big clubs or are you confident with the negotiating skills of Jurgen Klopp? We will wait to see whether the midfielder will live up to expectations and comparisons with Steven Gerrard as Liverpool's new number eight. Let us know your thoughts by commenting below or tweeting @AllOutFootball_ using the hashtag #AOF.