MK Dons and Robbie Neilson: On the Up 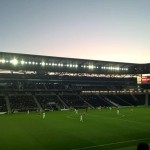 It has been almost two months since Scotsman Robbie Neilson made the trip south of the border to take over an MK Dons side who, at the time, sat 19th in League One.

It was a tall order to take over Karl Robinson whom the fans regarded as a legend, but many were optimistic ahead of the beginning of the Neilson era.

His first game was not one that could ease him into life managing in England, as his side faced AFC Wimbledon at home. A win in that game gained Neilson instant adoration from the MK Dons faithful.

After some back-to-back losses, against Gillingham and Charlton, MK Dons finished the year with a win, then started a new one with a draw.

Since Boxing Day, they haven’t lost a league game (4W, 2D) and have recorded impressive wins against Northampton and Peterborough.

The Scot is really putting his spin on the squad, the departure of Samir Carruthers was met with the arrivals of Robbie Muirhead, Maecky Ngombo, Stuart O’Keefe and Harvey Barnes, the latter has already bagged two goals.

They currently sit just eight points off the play-off places and, if they carry on this surge, anything could happen.

The thing most fans are enjoying is the newfound passion possessed by their side. It is great to see the team scoring goals and playing some fantastic football.

I spoke to Joe Rider, who follows the side home and away “Robbie has come in and done a huge job that is very difficult. Having no experience in England let alone the league is truly remarkable that he’s just come in and got us clicking like that” said Joe.

“On and off the pitch he’s winning everyone over. Makes big decisions like they’re nothing. With the confidence we have, play-offs aren’t that far off and in my opinion, we can do it”.

He really has instilled a fresh sense of optimism which was so redundant in the early stages of this season.

Chuks Aneke has found his feet at the club, and he has scored four times since Neilson came in. Another striker who has hit form for the Dons is Kieran Agard, who has scored five in his last six league games.

I think the wins against Northampton and Peterborough really got the fans excited, especially the 4-0 thumping of The Posh away.

We were playing such fluid football at a quality I haven’t seen since our promotion winning season, it was great to watch.

The next four games I see as very winnable for MK Dons. Away ties with Oxford and Bury are followed with home games against Fleetwood and Shrewsbury. If they can continue their unbeaten run into March, who knows where they could end up in the table.

The MK Dons fans called for change, they got change and they are all the better for it.

They certainly do not miss Karl Robinson, who recently branded the club as ‘clowns’ for not allowing Ben Reeves to sign for Charlton.

Neilson may not be the most passionate, or the most animated, but he certainly knows what he is doing with the club. He is getting the best out of a talented squad. MK Dons are on the up.

What do you think MK Dons fans? Leave your thoughts in the comments!