Just three days after their emphatic 4-1 win over Republic of Ireland, Wales were condemned to a 2-0 defeat in their second UEFA Nations League game as a fine Danish side strolled to victory in Scandinavia. Ryan Giggs' men would have gone into this game with plenty of confidence following their heroics on Thursday night in Cardiff but it was not to be as a Christian Eriksen-inspired Denmark outclassed a strong Welsh outfit, which included Gareth Bale and Aaron Ramsey.

It was obvious from the very start that Wales' tactics were slightly more cautious than that of Thursday's against Ireland as Denmark pressed and were successful in dispossessing the Welshmen on numerous occasions in the opening exchanges. The visitors' best chance in the first half fell to Gareth Bale who got himself into a good position to shoot but fired just wide after 25 minutes. Just nine minutes later, Tottenham midfielder Christian Eriksen, gave the hosts the lead with a finely struck half volley just inside the penalty area which went in off the post down to Wayne Hennessy's right hand side.

Just after the hour mark, things got worse for the visitors as 17-year-old Ethan Ampadu was adjudged to have handled a cross from Viktor Fischer. Talisman Eriksen stepped up to double Denmark's lead with a comprehensive spot-kick. 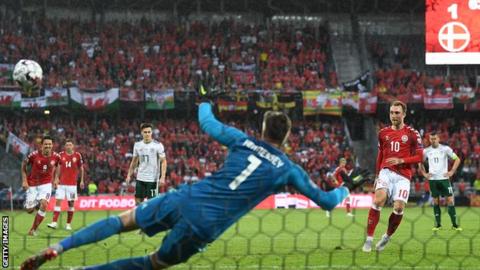 Wales struggled to mount a serious chance of a comeback after this with lots of passes going astray and many attacks breaking down. Gareth Bale struck a shot from 30 yards on the right hand side which went just over the bar just before added time but Denmark comfortably saw it through to the final whistle.

This defeat certainly gave the Welsh players something to think about and it meant that many optimistic fans would come crashing back down to earth after the joys earlier in the week. However, there were some positives to take out of the game and Wales will be hoping it won't be too much of a setback in their bid to qualify for Euro 2020 and beyond.