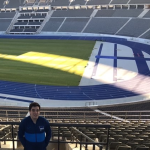 Luka Modric, the name of the first player, to win the Ballon d’Or, that isn’t Lionel Messi or Cristiano Ronaldo since 2007. He was presented with the award at the awards ceremony presented by France Football in Paris.
Speaking to BBC Sport; Modric said that this award was for everyone has been overlooked in the last 10 years, in favour of Messi or Ronaldo.
“Maybe in the past there are players who could’ve won the Ballon d’Or like Xavi, Andres Iniesta, or Wesley Sneijder, but people are now finally looking at someone else”.

From humble beginnings, to a global superstar, Luka’s childhood was extremely difficult, and one he says that ‘shaped him as a person’. His childhood coincided with the ‘Croatian War of Independence’ in 1991. He was forced to flee his home and live in a hotel for Seven years. In an interview with ‘The Independent’s Kevin Palmer, he stated his love for football, and how it kept him going. “We lived in a hotel for many years as we struggled financially, but I always loved football. I remember my first shin pads had the Brazilian Ronaldo on them and I loved them”. Luka’s relief from world of war, was football, along with many other children that he befriended during the time.
North London was Luka’s first port of call outside Croatia, with the playmaker signing for Tottenham Hotspur in 2008 for a club record fee of £16.5 million. His physicality was questioned yet again, as was when he was a child, with Arsenal manager, Arsene Wenger and the British media labelling him as a ‘lightweight’ due to the lack of physical prowess. In an interview following these statements, Modric responded by saying “Maybe I look like a lightweight, but I am a strong person, mentally and physically”. After the appointment of Harry Redknapp, he was moved into his more natural position, the centre of midfield, following the club’s qualification for the champions league in 2009/2010, Modric stated he was happy at Spurs. Saying “I want to stay here and achieve great things with them, last year’s top four finish showed what we can do”. Three years of success followed, with the 2010-11 season being his best in a Spurs shirt, despite only scoring three goals and contributing two assists, he averaged the highest number of passes per match for Spurs during that season. He was also voted in the ‘PFA Team of the Year’, with Manchester United manager, Sir Alex Ferguson saying that he would’ve chosen Modric for player of the year for that season.

A season of uncertainty around Modric’s career followed, with him initially refusing to play for Spurs in their 2011-12 season opener against Man United, which Spurs lost 3-0. Modric admitted to his head “not being in the right place”, as he was trying to force through a move to Spurs’ London rivals Chelsea, with Spurs rejecting a £40 million bid on Transfer Deadline Day. This proved to be Modrics last season at Spurs, as he was eventually sold to Real Madrid on 27th August 2012, for approximately £30 million.

Luka’s first few seasons in Spain were tough, with his first being particularly tough, with the presence of veterans Xavi Alonso and Sami Khedira in defensive midfield, with Mesut Ozil’s lightening form in the playmaking position, Modric was mainly limited to substitute appearances within the first few months of his Madrid Career. To top off his nightmare first season, he was voted as the worst signing of the 2012-13 season by Spanish Newspaper outlet, ‘Marca’ at the end of 2012. However, during this season in a Champions League game against Manchester United, Modric was introduced as a sub, and tuned the game on its head, scoring one goal and influencing the pattern of play for the remainder of the game, seeing Real Madrid progress on away goals, this game was seen by many as the turning point in his Real Madrid Career, and the one that propelled him to midfield greatness.
Since he arrived in Spain, Luka has won 1 La Liga title, 2 Spanish Super cups, 1 Copa Del Ray, 3 Super Cups and 3 Club World Cups, along with an unprecedented 4 Champions League titles. Former Yugoslavian Professional Footballer and Real Madrid Director of Football, Predrag Mijatović, described Modric as “Real Madrid’s best player, along with Cristiano Ronaldo”, also stating that he is the “Head of the midfield in a complicated environment”.
On a national scale, Modric is a Croatian hero, not just on the pitch, as he has been awarded ‘honorary citizenship of his hometown, Zadar in 2018’, after the countries historic run to the 2018 World Cup Final. On the footballing front, he is level with Davor Suker with 6 Croatian Footballer of the Year Awards. This, coupled with his incredible form for Real Madrid, led to him ending the Leo Messi/Cristiano Ronaldo dominance of the Balon D’or, by scooping the award in December 2018.
From being ‘homeless’ on a war-torn estate in rural Croatia, to the pinnacle of World Football, Modric’s career path has inspired millions, and has shown the true impact of football, and hard work can have on people’s lives.

Getafe vs Villarreal: The battle for the European spots hots up.