When people talk about the Crystal Palace side of the last couple of years, they immediately mention the likes of Wilfried Zaha, Aaron Wan-Bissaka or even Andros Townsend. A player who doesn’t get half as much credit as he deserves is Luka Milivojevic. Milivojevic was signed in 2017 for a reported €16 Million from Olympiacos and has been sensational ever since he arrived.

Over the last two seasons, Milivojevic has been outstanding at breaking up the play and getting Crytsal Palace moving forward, he boasts a high percentage for progressive passes and forward passes, not only showing that he is good with the ball at his feet but he uses the ball effectively and sets Palace off on attacks, giving their attacking players, like Wilfried Zaha, the freedom to create chances and score goals.

Along with being a capable passer of the ball from deep, Milivojevic has also become a bit of a set piece specialist. In his first year and a half at Crystal Palace, Milivojevic dispatched nine out of ten penalties having previously never taking a spot kick professionally before, the only one he didn’t score coming at home to Manchester City which Ederson saved smartly. 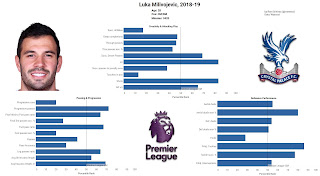 In the 18/19 season, Milivojevic contributed 12 goals and 2 assists, whereas their main attacking threat in Zaha was only involved in one more goal, contributing 10 goals and 5 assists. This really shows the importance of Milivojevic’s set pieces, without his ability from dead ball situations, Crystal Palace would have been hanging over the drop zone, if not, relegated.

Defensively, the Crystal Palace number 4 has been a rock in the midfield, boasting a 67% tackle success rate since he joined, this is 1% higher than N’golo Kante and only 3% short of Fernandinho, who is arguably one of the best holding midfielders in the world. 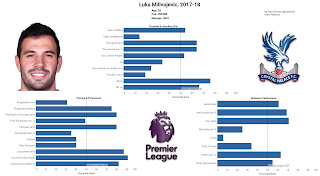 Most of Milivojevic’s stats are above the average percentile of that in the Premier League, which begs the question of why isn’t he talked about as much as some other midfielders in the league? He has shown over the last two and a half years the quality he possesses on the ball, breaking up play and from set pieces. Milivojevic is a midfield general who goes about his business quietly and let’s Zaha take all the glory, but really, where would Crystal Palace be without him?