Why The Lower Leagues Are Better Than You Think

Historically, the Premier League has always been the promised land among football clubs in England, and it is the dream of fans all over the country to see their side line up against the best in the world in what many perceive to be the best league in world football.  But, while this remains the case, the gulf in class between the Premier League and England’s lower tiers is drawing ever narrower.

I grant you, North Ferriby’s Grange Lane isn’t quite Old Trafford, but you only need to look at the recent performances of Lincoln City and Sutton United in the FA Cup to know that you can see quality football as low down as the fifth tier of the English game.  Sutton found themselves in the fifth round of the competition before going down 2-0 to Arsenal at Gander Green Lane, while the Imps went all the way to the quarter-finals before losing 5-0 to the same opponents.  It is the furthest a non-league side has ever gone in the FA Cup, and over the course of this season’s competition a stunning 13 Football League sides crash out at the hands of non-league opposition.  Although these statistics seem amazing, I simply see them as evidence of the great progress being made by non-league teams.

A big reason for the increase in quality in lower league football over the last few years is undoubtedly that more teams are becoming professional.  Almost all of the National League teams at the moment are full time, with the notable exception, among others, being Sutton.  This means that the managers at the highest level of non-league football now have all week to work on organising their teams rather than just a couple of training sessions in the evening.  The other notable difference since most clubs went professional is the clear upturn in the fitness levels of the players.  In previous decades, non-league players were regularly seen pulling up with cramp when they played against league teams, but this is rarely the case any more as many non-league players find themselves in peak physical condition now they are professional.

Image courtesy of the Mirror[/caption]

It is not just the quality of non-league football that is improving either, the lower levels of the Football League are also far better than they used to be.  Leagues One and Two have an unsavoury reputation as the home of two footed tackles and route-one football, but I feel that reputation is somewhat undeserved in recent seasons.  Of course, it is difficult for anyone to string a few passes together on the ground when playing at Newport County’s Rodney Parade, but each week also sees some flowing football from the likes of Sheffield United, Millwall, Portsmouth, and Plymouth Argyle which invariably goes under the radar.  As for the perceived over-the-top physicality of the lower leagues, while games are always competitive, can anyone really say that players are dirtier than their counterparts in the Premier League?  Tell that to Lee Cattermole, Tyrone Mings and Zlatan Ibrahimović.

The likes of Jamie Vardy, Michail Antonio and Dele Alli are testament to the fact that there are top quality players floating around the lower leagues and non-league, just waiting for Premier League scouts to discover them and for managers to take a gamble on them.  The reason that so few players rise up from the lower leagues to become household Premier League names is, in my view, down to the fact that managers at the top level have so little time to achieve success so are unwilling to gamble their jobs on the performances of a young player from the lower leagues.  For instance, what incentive is there for Mark Hughes to risk a few poor results which could lead to him getting sacked in order to find the next Jamie Vardy when he can keep picking Jon Walters, who he knows will chip in with five to ten goals a season without doing anything spectacular?  The quality players are there in the lower reaches of the game, but managers are simply not confident enough to give them in a chance due to constantly having to fear for their jobs. 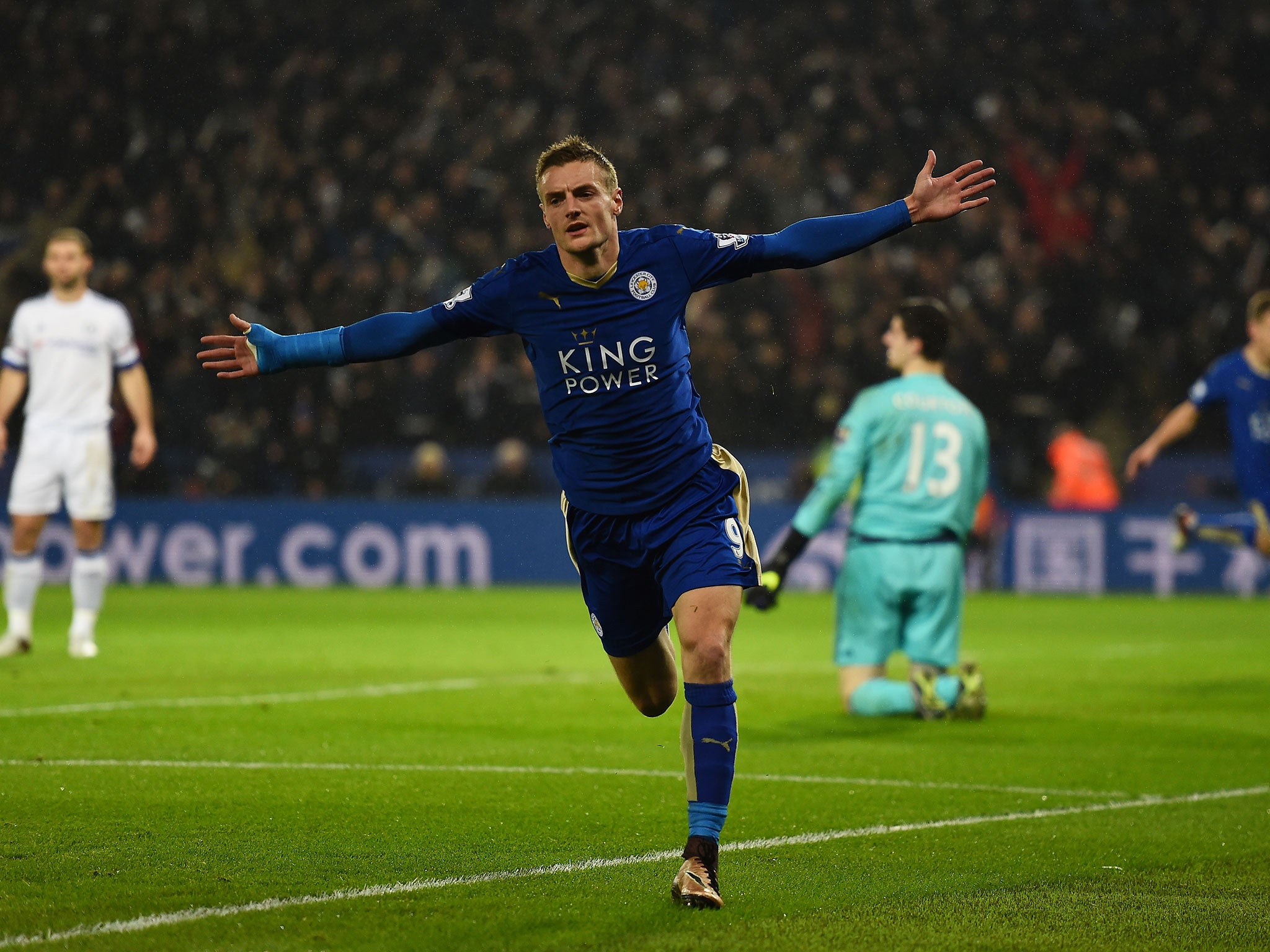 Image courtesy of the Independent[/caption]

The most compelling reason to attend lower league football, however, is the die-hard supporters that can be found at every club, from Yeovil to Carlisle.  The fans who travel the country to watch their sides do not care if the quality of performance they are given is not always up to scratch; often they use it as inspiration for their chants.  Grimsby supporters who made the 500 mile round trip to Portsmouth on a cold Tuesday night to see their side comprehensively beaten 4-0 did not stop singing and earned the respect of their counterparts from the South Coast with their unwavering support.  Meanwhile, Sheffield United and Bradford City both get average attendances of around 20,000 for home matches despite being in League One, showing that there is still plenty of passion as you go down the leagues.  Will Grigg’s on fire became a phenomenon throughout the continent last summer, and was made up by Wigan fans who were in League One at that point, while Hartlepool United fans have gained publicity on a couple of occasions for their ‘fancy dress away days’, most recently travelling down to Plymouth dressed as stormtroopers on the last day of last season. 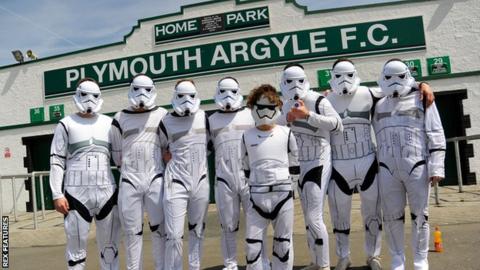 Image courtesy of the BBC[/caption]

Non-league fans do not lack for passion either, and they travel the country in their hoards every weekend.  Over 9,000 Lincoln City fans made the trip to the Emirates for their big day out in the FA Cup this season, while 105 committed Tranmere Rovers fans recently made the trip all the way to Torquay on a Tuesday night to see a goalless draw in the Vanarama National League.  Such fans laugh at those who would rather stay at home in the warmth to watch their side live on Sky Sports than brave the cold at an away match in the middle of nowhere on a rainy Tuesday night.  Such unwavering passion deserves respect from the less committed of us and should cause us to question why they would do it if the quality of football was really as poor as it is reported as being.  The answer, of course, is that the level of football in the English lower leagues is far better than it is given credit for. 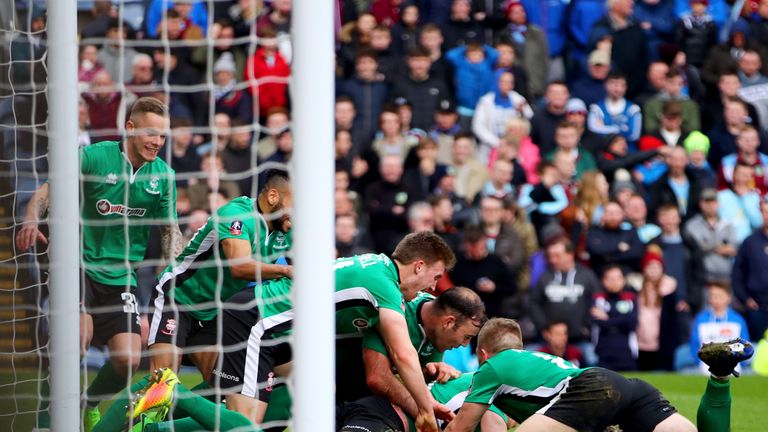 The whole experience of lower league football is very much underrated, and the gap between the Premier League and those below it is far narrower than most people realise.  Each week sees fluid football being played around the country and an assortment of great goals being scored, but somehow the reputation of League One and below being a bunch of long balls and tough tackles from overweight players endures.  The recent exploits of Lincoln and Sutton should put paid to that, as well as the players who have worked their way from the lower leagues to the Premier League over the  past few seasons.  The fans turn out every week to watch their beloved sides play outside the top two divisions, and many of them will tell you: you don’t need state of the art facilities and multi-million pound players to be able to put on a great game of football for loyal supporters.