Liverpool has had one of the hardest months of football that any side will experience in a season. They went away to Tottenham and won 2-1 then dramatically beat French giants, PSG in a 3-2 thriller at Anfield three days later. They eased past Southampton in style at the weekend and then faced Chelsea twice in the next week, losing the first at Anfield and getting a separate point away at the weekend. Now, off the back of a poor loss to Napoli, Liverpool will host the current Premier League champions, Manchester City this weekend. 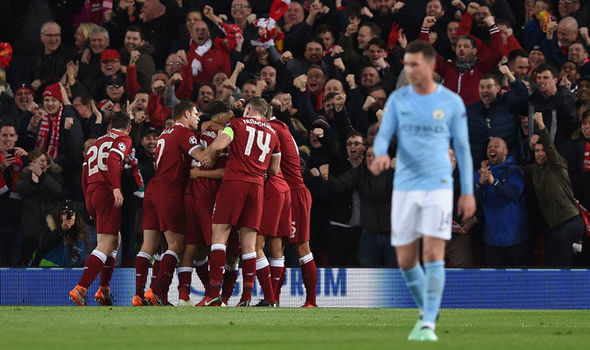 So far, Manchester City hasn't looked like the side that dominated English football last season but that hasn't stopped them from sitting at the top of the Premier League table heading into game week eight. They've struggled in the Champions League and have probably missed the creativity of Kevin de Bruyne in midfield but players like Bernardo Silva and Ilkay Gundogan have certainly stepped up in his absence. However, with de Bruyne unlikely to be back fit, they'll face their biggest challenge of the season so far when they take on Liverpool at Anfield on Sunday. The Reds have had a flying start to the season but are without a win in three games despite sitting second in the Premier League table, only behind on goal difference. They shocked Manchester City three out of the four times these sides met last season and will be hoping to do the same when the reigning champions visit their bogey ground.

Liverpool's starting lineup is likely to be the same as it was following Naby Keita's withdrawal against Napoli on Wednesday. The Guinean suffered a back spasm and was rumoured to be out until the New Year but further tests revealed nothing serious. While Klopp's summer signing might be available for the game, he's unlikely to risk it. Alisson Becker will remain unchallenged with his spot in the team while the back four will also remain unchanged. Jordan Henderson will come in to replace Naby Keita while fellow Englishmen, James Milner will keep his place along with Georginio Wijnaldum as Fabinho is yet to break into the starting eleven. Adam Lallana is back in full training but still a doubt. Mohamed Salah will hope to kick-start his form against the side he put 3 past last season while Sadio Mane will hope to get the better of Kyle Walker once more. Roberto Firmino will lead the line.

Ederson will stay in goal hoping to make his case for the Brazilian starting eleven. Mendy is unlikely to be back and Gundogan is a doubt. De Bruyne is back in training but again, unlikely to be risked. Laporte will probably start at left back with Kompany and Otamendi partnering at the back with Walker at right back. Fernandinho and the two Silva's will make up the midfield three with Sterling up against his former side and hoping to cope in the hostile atmosphere. In-form Aguero and Leroy Sane will both hope to threaten Liverpool's defence.

A fantastic game that will be key in both team's title challenge. Let us know what you think will happen at Anfield by tweeting us @AllOutFootball_ using #AOF #LIVMCI. I'm going with 3-2 for Liverpool.