Red vs Red, a longstanding rivalry that will always be synonymous with the Premier League. Liverpool were aiming to go top of the league with a resounding victory while United were aiming to keep pace with the other top 4 challengers. On paper, this seemed likely with Liverpool having won 4 on the bounce while United have struggled to impress, having collected just 7 points in their last 5 games.

This match was heavily anticipated, with both teams strengthening massively in the summer with Mourinho coming in and Klopp having a full pre-season while both spending massively on transfers too. Also being a traditional rivalry, tensions would be running high as this would traditionally be a title decider.

In a game bereft of chances, Mourinho had set out to get a point at one of the most intimidating grounds and against an in-form Liverpool team.

Klopp of course was banking on his gegenpressing strategy to create chances. Gegenpressing refers to pressing opponents high up the field to force turnovers and create goal scoring chances when the ball is lost in dangerous positions. This is what Klopp has been renowned for and has been successful with it, winning league titles with Dortmund and reaching a Champions League final, while reaching 2 finals with Liverpool within half a season.

Also when Liverpool won the ball they tried to play the ball forward quickly and get into positions where their mobile attackers could run at defenders (qualitative superiority) or outnumber the opponents (quantitative superiority). They wanted to catch United on transitions when they pushed men higher up the field or when United’s man marking drew players out of position.

Playing between the lines

Whether by accident or design, to avoid United’s press in the first phase of buildup, the Liverpool centre backs played plenty of hard ground passes to break through the lines. They however ran into some problems. The receivers of such passes were often marked man to man by their markers and with the small stature of Liverpool’s attackers, it was extremely difficult to hold up play. There was also poor support around the receiver of such passes, making it extremely difficult to lay off the ball resulting in unnecessary concessions of the ball.

As seen from the diagram above there are bold arrows linking the centre backs and attackers directly, showing Liverpool’s direct, vertical game plan.

In their frustration, Firmino and Mane dropped deep to receive the ball in the middle third of the pitch, taking away from the final third where their skillset would be most suited to.

Mourinho, who is especially reactive in big games, tailored his approach to cater to Liverpool.

Jurgen Klopp is infamous for his gegenpressing style whereby his teams would push high up the pitch and force turnovers especially in dangerous positions. To avoid such problems, Mourinho decided to reduce passing at the back to avoid concession of the ball in deadly areas.

As seen from the diagram there are few links between centre backs and fullbacks, showing a lack of passes between the back 4.

De Gea also constantly took long goal kicks, aiming for the likes of Fellani and Pogba. This was to exploit United’s height advantage in midfield while avoiding the problem of being pressed while building up.

As seen from the diagram, there are arrows between Fellani/ Pogba and De Gea which implies a very direct approach from United

Implementing their own press

United would press selectively with a man orientated press on selective scenarios. If there was no opportunity to do so, they would fall back from into their 442 mid-block, with Pogba alongside Ibrahimovic, trying to prevent passes being played into Liverpool’s central midfielders. You can check out my friend Leroy for an in-depth analysis of United’s pressing here. https://twitter.com/LFCImpulse/status/788436537352433664

Tempo of the game

Mourinho wanted to keep the tempo of the game slow and disjointed to prevent Liverpool from building up any momentum or settling into any momentum. This was to prevent a kick and rush game where Liverpool’s more mobile offense and well-practiced gegenpressing could take effect.

Mourinho instructed United to purposely slow the game down, as seen by 3 fouls in the first 4 minutes. Players walked to take throw ins and free kicks while De Gea also took his goalkicks in a leisurely manner.

Mourinho’s masterstroke was playing Herrera, a very underrated player, together in a double pivot with Fellaini slightly deeper. He is very press resistant, able to dribble his way out of trouble when needed. To help circulation from the back, he often dropped deeper and helped connect United’s wing based attacks. He is also extremely intelligent, able to dictate the ebbs and flows of the game. This allowed United to dictate the tempo of the game on their own terms as seen from the diagram above

Despite being given a considerable share of the possession, they were unable to create against a resolute and compact away defense. This was often due to the poor positioning the Liverpool players had while in possession.

This has been a flaw of Jurgen Klopp’s teams. At Dortmund, he struggled massively in his last season (14/15) when opponents were content to sit back and let Dortmund have the ball. With poor positioning while in possession, they had to no reliable way to buildup and progress with the ball. Thus, few chances were created. This was extremely apparent here. In addition, poor pass selection from the Liverpool players did not help their cause, leaving them in disadvantageous situations and conceding the ball unnecessarily.

The absence of key players here was a big blow to Liverpool. Lallana is a very creative and press resistant player, connecting the midfield and attack well and able to dribble his way out of situations. Wijnaldum’s tenacity and energy was also missed here. This had a knock-on effect where Coutinho had to play as part of a midfield trio and was less able to drift into deadly positions (Zone 14) and take long shots. Can, who was starting his first league game of the season looked off colour, taking heavy touches when he did not need to.

Poor coverage of half spaces

Mourinho’s team have had a tenacity to drop his wingers deep to forma 5 or even 6 chain at the back. This is not an ideal scenario as the crucial spaces in front of your defense is left open and the midfield had to work extremely hard to shift horizontally to prevent the ball near half spaces from being left open. 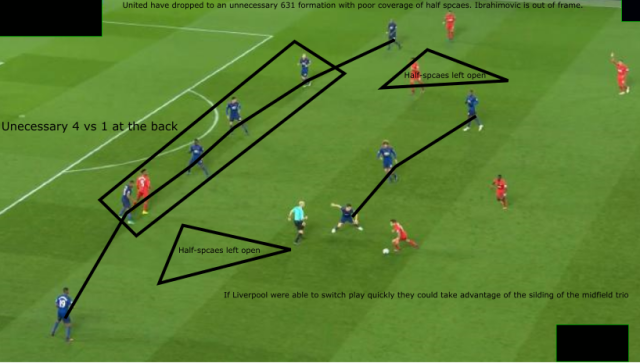 Thankfully for them, Liverpool had poor positional play and was not able to take advantage of United’s poor coverage of the half spaces.

Pogba has never been played in his preferred position when he was with United, to the left of a midfield trio in a box to box role, with less emphasis on defending. Mourinho has constantly used him in a double pivot, a “10” here or even trying to fit him and Rooney as an advanced duo in a 4141. Mourinho is not playing to Pogba’s best attributes. Pogba loves to drive forward with his raw power, and arrive late for shots and crosses into the box. He is not defensively inept, but would prefer a reduced emphasis on defending to allow him to focus on getting forward. Playing him in a duo makes him take up more defensive responsibilities than needed while as a “10”, spraying passes with his back to goal is not what he is best at. Perhaps playing him deeper in a trio with Fellani, Herrera/Schneiderlin with suit him better. There are bodies behind him when he flies forward on the attack and is able to arrive from deep when he has more time on the ball to execute shots or arrive untracked into the box for crosses.

Liverpool tried to improve their passing with greater speed of pass and with Lallana introduced to add more guile in midfield in place of a striker wanting to play on the shoulder on the last man. Liverpool did improve slightly in their chance creation but many were half chances, and United crowded them out with some impressive last ditch defending.

Liverpool did not throw excessive men forward in search for a goal as they did not want to gift 3 precious points to a top 4 rival, while Mourinho saw out the game with late defensive substitutions.

It was a very thought out and mature gameplan from Mourinho. United suppressed an on-song Liverpool team, reducing them to a measly 0.36 expected goals away at Anfield. United controlled the game on their own terms and gave Liverpool the ball in non-threatening areas. Their attacking structure left a lot to be desired however, with an overreliance on a wing orientated buildup play and relying on individual brilliance to create chances in the final third. Mourinho has also yet to find a suitable role for Pogba and implement it in a competitive game. Liverpool were extremely poor especially in the first half with poor spacing between teammates and poor choice of pass. For all their brilliance in the last few games, they struggled against a (generally) well organized United side. Klopp has to develop a better shape in possession when going forward to reduce the over reliance on gegenpressing to create chances. This will also make Liverpool more potent when in possession of the ball and make them an even stronger bet to finish in the top 4.

Do you have any additional thoughts on this analysis? Let us know in the comments below!

Credits to @11tegen11 for the diagrams and Leroy for the video