We are now into fixture 13 in the Sky Bet League 2 2016/17 season and the league table is already, as many would say, starting to take shape in favour of the promotion favourites. Plymouth currently top the table having won nine of their first twelve games after a slow start. Derek Adams' men have set the ball rolling in the first 12 games, with Doncaster and Carlisle breathing down their necks. This preview will bring us the inside outs of the top three key games in this weekend's fixtures.

This one will be evidently be one of the key fixtures of the season in terms of a promotion push. The 'dock derby' as it is known features these two thunderous clubs and is set to be a cracker. Plymouth have lost just two of their opening twelve, drawing one and winning the other nine. Many Portsmouth fans will see this as an opportunity to overcome the heartbreak of that famous play off semi-final last season which saw a last minute Peter Hartley winner which saw Plymouth clinch themselves through to the play-off final and cause major heartbreak for Pompey. This cruncher of a game is expected to be a sell out at Home Park and will feature some key players including Portsmouth's top scorer, Gary Roberts, who will be hoping to add to his tally of six this season and cause Plymouth problems. Another player to watch, some may argue, is Plymouth's Graham Carey, who has notched five in twelve for The Pilgrims. Portsmouth manager Paul Cook described this as a 'must not lose' earlier in the week, which may seem as though The Blues may be happy with a solid point. The bookies make Portsmouth the favourites at 6/5 which may be questionable considering Pompey's wobbly form on the road so far this season. Plymouth are a good 9/4 shout if you are a betting man. Having been solid at home so far, Plymouth have bagged thirteen points from a possible eighteen so far at Home Park, dropping points against Hartlepool and suffering a 0-3 demolition against Luton Town. Plymouth do however also have the best defence in the league so far, only conceding six in eleven. This is going to be a feisty affair and will include probably the two biggest clubs in the league for both teams into shape. Who will come out on top?

This fixture will particularly thrill me mostly because I will be there cheering on my beloved Monkey Hangers! However, by all means this will be our hardest encounter of the season so far, despite playing Plymouth who currently top the table and salvaging a point. Carlisle look in many people's opinion as the most organised and factually the most hardest team to beat in the league. Keith Curle's men are yet to be beaten, unbelievably in the first twelve, drawing seven and winning five. Many people will see Carlisle as dark horses this year to go up, they have some quality in their side, there is no doubt, with Jabo Ibehre leading the line and not short of a goal or two, and Jason Kennedy scoring from midfield, nothing can really seem to go wrong for Carlisle at the moment. Carlisle also have the joint best second defence in the league, which may cause problems for an also hard to beat Hartlepool. Hartlepool do however, have in many people's opinion, the best midfielders in the league in Nathan Thomas, who has bagged 6 in 7 for the Pools. With Pools gaining two players from international duty in Liam Donnelly and goalkeeper Trevor Carson, Hartlepool look to have a full strength squad at hand to throw at The Cumbrian's. Hartlepool manager Craig Hignett has said all of the pressure is on Carlisle as the Monkey Hangers look to build on their average form which has seen them fail to win at home all season, only picking up their three wins away from home. One thing is for sure is that Brunton Park will be bouncing tomorrow, as Carlisle and Hartlepool fans will see this as a rivalry, thus being their closest fixture in terms of travel all season, both sets of fans like to call this 'The Northern Derby'

Who will come out on top? 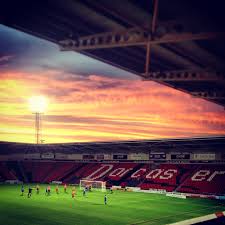 This one features two sides who were relegated to the division last season, with both teams looking to bounce straight back. Many bookmakers and football pundits across the country are tipping Doncaster to bounce straight back. Darren Ferguson has steadied the ship at the Keepmoat, and Doncaster currently sit second in League Two, behind table toppers Plymouth. Doncaster are on fire in front of goal so far, netting twenty five times in twelve, averaging just over two goals a game, which is Championship winning standard by all means. Andy William's is without doubt the player to watch for Donny, who seems to be finding the net for fun at the minute, he is currently averaging 153 min's per goal which is the fourth best in the league average wise. Donny also have record breaker James Coppinger to thank for chipping in with the goals too, the '500 not out' midfielder has netted six times so far this season, setting two up. One thing is for sure is that Doncaster will be there or there abouts this season, which doesn't quite apply to visitors Colchester United, who are currently stuck in mid table at the moment, and are finding it hard to hold games out, Colchester have found themselves in front many of time this season but have struggled to hold on and often find themselves struggling at the back, which explains their 16 goals against so far this season. Will Colchester reimburse their League One potential and pick up their form?

Are there any games that are unfortunate to miss out? What are your predictions for these games? Let us know in the comments below!