Is there a North London power shift? The recent wins for Tottenham Hotspur over Everton and Bournemouth in the Premier League were indeed very dominant and crushing. The Toffees, who are looking to enter Spurs’s “realm” of Champions League football, World Cup Golden Boot winners, and world-class sporting arenas, know they have some way to go to enter this station. Bournemouth have done well this season, but Spurs made short work of them.

Spurs also gained a League Cup quarter-final win over old enemies Arsenal earlier in the week. This is despite Arsenal beating them in the league 4-2 earlier in December.

Currently, Spurs are third in the league, and Arsenal are in fifth. Much has also been said of the respective “power shift” between Arsenal and Tottenham in recent seasons, and the win vs. Everton, Spurs’ current league position, and the League Cup game, have all added to this talk.

As a Gooner myself, I remain (albeit with admitted subjectivity) sceptical as to the nature of this power shift.

Yes, it is true that Tottenham have finished above Arsenal in the league in the last two seasons. And in terms of player quality, both are evenly matched. Both sides have legitimately world-class players, ranging from Kane, Alderweireld, and Lloris, to Aubameyang, Lacazette, and Ozil. As of 18/19, Tottenham at the time of writing sit second, and arguably have played the better football. They certainly have been more clinical when it counts, and thus have gained more wins in consequence.

However, I think terms such as “power shift” or even “dominance” need to be defined here. And I’m going to use history, and examples from other clubs, to do such. 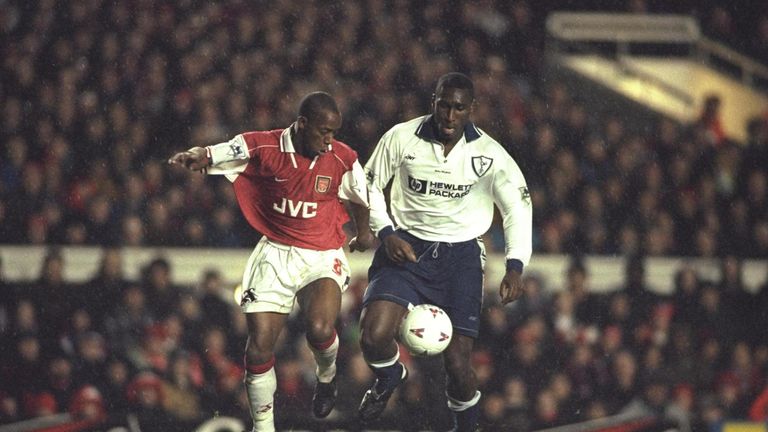 Sol Campbell was very good as a Tottenham player but achieved legendary status at Arsenal - winning three FA Cups and going invincible in 2004. His move symbolised the gulf/depth between the two then. Wright, of course, is a prime Arsenal legend.[/caption]

It is true that for much of Premier League history, Arsenal has been a superior side to Spurs. From 1992-1995, which comprised the George Graham portion of Arsenal’s PL existence, Arsenal won three trophies (FA Cup, League Cup, Cup-Winners Cup), whilst Tottenham won nothing in this period. The teams alternated in league positions, and both had stellar players. Wright, Adams, Seaman, Dixon, Bould, Merson, Sheringham, Anderton, Barmby, etc. were all regular England internationals in this period. The addition of Klinsmann for Spurs was a boom, which albeit lasted only a season.

The 1995-96 season saw George Graham replaced with Bruce Rioch at Arsenal, and Dennis Bergkamp – a club and Premier League legend – arrived at the club. Gerry Francis was Tottenham manager still, and both finished relatively close in the league in points terms, but with Arsenal 5th and Spurs 8th.

Legendary captain and leader Tony Adams scored the winner in the 1993 FA Cup semi-final between the two.[/caption]

Rioch left in 1996, as did Francis in 1997, but then the shift became more pronounced than ever when a certain Frenchman with a German-sounding name arrived at Arsenal from the Japanese J-League. I wonder whatever happened to him?

Arsene Wenger cemented a near era for Arsenal and the League in general and changed much both on and off the pitch in both respects.

From 1996-2005, Wenger won seven trophies at Arsenal, including three PL titles, and four FA Cups. He also reached the 2000 UEFA Cup Final, and was the closest and perhaps most memorable challenger to Sir Alex Ferguson’s stellar Manchester United team.

For various reasons, from 2005 to the present day, Arsenal has stagnated, and Tottenham has increased its power. These range from moving to the Emirates Stadium, poor transfer spending, or bad tactical decisions, to Spurs under owners ENIC getting a more cohesive structure in place to compete.

However, given Tottenham since 1992 has only won two League Cups, and Arsenal has attained much more, there has to be more to this power shift than merely finished above Arsenal.

[caption id="" align="aligncenter" width="656"] Robbie Keane scored the winner in the 2008 League Cup semi-final, where Tottenham beat Arsenal 5-1. Spurs went on to win the trophy, defeating Chelsea in the final - to date this is their last major honour.[/caption]

A brief re-telling of PL times shows that in terms of trophy wins and success over a sustained period, Arsenal has been the superior side and club.

So, in my view then, this is one criterion for a power shift. The successes of both the Graham and Wenger years must be accounted for if there is or will be a switching of the guard, as it were.

Liverpool and Manchester United have a rivalry very similar in shape, form, and expression to Arsenal and Spurs. Whilst Everton, Manchester City, and Leeds United, are firm rivals in some form one of either clubs, the Liverpool/Man United schism represents not just inter-city rivalry, but jostling between the two biggest English football clubs. Another comparison can be seen between their respective fortunes over the past 40-50 years.

In the 1970s and 80s, Liverpool was the dominant side in England. Manchester United, whilst a better-supported club perhaps domestically and globally, won only a few FA Cups in this period. Liverpool was serial league and European Cup winners, though akin to Arsenal/Tottenham in the PL-era, both were blessed with star names. For every Souness, Rush, Hansen, Barnes, or Dalglish, there was a Robson, McClair, McGrath, Strachan, or Stapleton.

But once Sir Alex Ferguson won the FA Cup in 1990, and firmly got into his groove at the club, things changed radically. Dalglish resigned as Liverpool manager in 1991, and club legend Souness didn’t manage to restore the club to the heights of his playing days there.

It must be said that whilst Liverpool has attained major successes in PL history, it has not won the Premier League, and has not been as dominant as Manchester United. The Red Devils actually surpassed Liverpool’s record English league haul (20 to 18 currently), and their record of being the most successful English club ever (following their 2017 Europa League win).

United has stumbled since Sir Alex retired in 2013 but then did win three trophies (League Cup and FA Cup/Europa League) since then. Liverpool this season, at Christmas 2018, sit top of the league, but with the departure of Jose Mourinho as manager, and the prospect of internal club changes, it remains to be seen who will be dominant between them now.

So akin to Arsenal/Spurs in PL history, Liverpool/Manchester United has seen respective shifts in dominance between them. It’s clear then that there was an apparent power shift from Liverpool to Manchester United, based on sustained trophy wins over several years, or even decades.


So, is there a power shift?

When looking at what has made Arsenal, Tottenham, Liverpool, or Man United, successful in recent decades has been not just holding top players. Arsenal finished 12th in 94/95 (George Graham’s last season as manager), but still held Wright, Seaman, Adams, Bould, Dixon, Winterburn, Merson, etc. Nobody can state these were bad players. It is a mix of good management on and off the pitch, strong owners/board, and a positive direction holistically, in addition to top players. It seems that clubs drop off when they lose these aspects in balance. And Tottenham has risen as a force because they hold these aspects in balance. 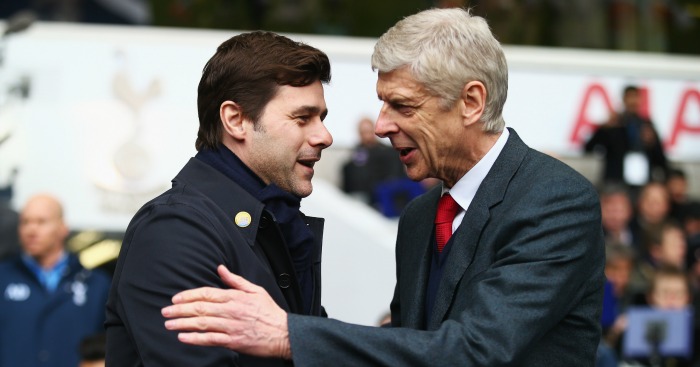 The decline of Arsene Wenger as Arsenal manager coincided with the rise of Pochettino's Spurs.[/caption]

But then a power shift, seemingly, should be when one club rises and the other falls, especially after years of comparative dominance.  Tottenham is rising, but then what complicates this is that Arsenal is changing also. Wenger has gone, and Emery is in, and Arsenal is making off-the-field changes which have been required for years, and are unique in some respects amongst global clubs. So Arsenal is getting the aforementioned holistic points to challenge once more.

Tottenham will be buoyed by their new stadium, and the revenues it could bring in. But the excess debts will add pressure to Mr. Levy and Mr. Pochettino, amidst the competition for the top four spots. A rising Arsenal and a reforming Manchester United to boot would add additional pressures to Spurs.

So, has there been a power shift? Who knows? It’s still too difficult to assess.  Note that Arsenal signed Aubameyang, Lacazette, Mkhitaryan, and kept on Ozil in the past two years. They also were linked strongly to Thomas Lemar and even Kylian Mbappe. The latter may make some chuckle, but Wenger did mention he spoke to him, and thus some move could have materialised. Arsenal’s global brand and stock are still higher than Tottenham’s, and it’s due to this that Arsenal has been able to attract such world stars to the club. This also extends to sponsorship deals, inclusive of the Visit Rwanda, cryptocurrency, and new Adidas deals. All of which are either national or world records and this still surpasses Tottenham’s reach.

Sponsorship, like all advertising, is based on reach and scope. This can be another factor, as Spurs’ sponsorship deals have not surpassed Arsenal’s as yet. In Tottenham's favour though, their new stadium will see their revenues equate with Arsenal's soon. Since Arsenal built the Emirates Stadium, this has comfortably been in their favour, but this may change once Spurs move in.

In my view, albeit tinged with bias, is that Spurs have to win more trophies than Arsenal over a sustained period, such as 5-10 years. And this must also be based on being a holistically more geared and structured football club. There is no guarantee this will happen, especially with the changes occurring at Arsenal.

So, yes, Tottenham has risen a lot vis a vis 10-15 years ago. But if by 2028 they have won a few Premier Leagues and (dare I say it) a Champions League, and Arsenal haven’t, then I’ll hold my hands up and cite there has been a power shift. If not, then I’ll hold my breath and wait and see.