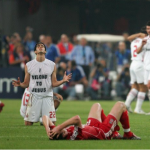 There have been a number of successful Scandinavian imports to the Premier League over the years, with players such as Peter Schmeichel, Freddie Ljungberg and Ole Gunnar Solskjaer writing themselves into English footballing folklore, participating in Manchester United’s incredible Champions League win in 1999 and Arsenal’s invincible season.

Another player who undoubtedly earned his place amongst these ranks is none other than John Arne Riise. The marauding left back cemented his place in the hearts of the Liverpool faithful with every missile of a shot he let loose with his laser guided left foot, and he deserves to be regarded as one of the best to make the journey from Scandinavia to entertain football fans on these shores.

Arne Riise had already tasted success before arriving at Liverpool in the summer of 2001, with his spell at Monaco producing a Ligue 1 triumph and subsequent Trophée des Champions victory in 2000. However, a rumoured rift with Claude Puel saw him end his time on the French Riviera, and Liverpool decided to part with £4 million to secure his signature amidst interest from Leeds and Fulham. Arne Riise made his debut against Bayern Munich in the UEFA Super Cup, a game that took place in the very familiar climate of Monaco’s own ground. Arne Riise certainly seemed to feel at home, with a surging run into Bayern’s half seeing him score the first goal of a game that would end 3-2 to Liverpool. To score a goal and win a European trophy in your first game for a club is enviable indeed, and it was a perhaps a glimpse at the triumphs that would be to come during his 200+ Liverpool games. Another debut in which Arne Riise grabbed the opportunity to present his attacking capabilities would be his first ever Merseyside Derby in September 2001, in which Liverpool had dragged themselves into a 2-1 lead after going 1-0 down to a 4th minute goal from Kevin Campbell. The game was still in the balance until Arne Riise picked the ball up on the halfway line, turned his man inside out with consummate ease before stroking the ball with his left foot into the back of the net. Liverpool secured the 3-1 win against their bitter rivals, and Arne Riise made yet another statement regarding his ability and penchant for scoring goals in the biggest of games.

The next big moment for Arne Riise in a Liverpool shirt would present itself only a couple of months later, this time against another set of fierce rivals, Manchester United. Football fans around the globe are fixated with the colossal significance of this clash, and supporters of each club watch this game waiting to immortalise the hero who wins it for them or vilify the player who seals their defeat. Michael Owen might have put United to sword with a brace, but even such an impressive display in this most important of games was resigned to a secondary story, with everyone’s primary concern being the unbelievable goal Arne Riise produced. The ball was rolled to him from a free kick, and the venom with which he hit it with his left foot was unparalleled. It could have shattered the crossbar as it ricocheted into the net, and as Arne Riise pulled his shirt over his head in jubilant celebration, it was evident that this would be remembered fondly by Liverpool fans as one of the greatest moments in the rich tapestry of the Liverpool-Man United rivalry.

Arne Riise’s career would continue to flourish on Merseyside, and he played his part in the 2005 Champions League victory in Istanbul, providing the assist for the Gerrard header that dragged Liverpool back into the game. Although his miss in the following penalty shootout might have been a career-defining mistake, the heroics of Jerzy Dudek ensured that the miracle of Istanbul was not derailed by an uncharacteristic mistake for a player who consistently performed well on the biggest of stages. 2006 would prove to be another successful year for Arne Riise and Liverpool, as the FA Cup and Community Shield both ended up on Merseyside. Arne Riise was, as always, at the heart of the action, helping to secure Liverpool’s place in the FA Cup final, wielding his lethal left foot to curl a shot through a wall of Chelsea players, who seemed to dissipate into thin air as the ball nestled into the goal. The Liverpool-Chelsea rivalry had developed a real sense of bad blood due to several high profile meetings in the 2000s, and Arne Riise as always proved that he thrived in these kind of games. While lesser players might produce anonymous displays, he made sure his performances merited the significance of these games with Chelsea. The Community Shield that year might have been a chance at redemption for Chelsea, but a surging sprint and deft sweep of that same left foot reduced any hopes of revenge for the Londoners into nothing. Chelsea fans and players were no doubt sick of the sight of Arne Riise wheeling away in delight after yet another goal against them, but this sentiment towards him is testament to the fact that, when the time arose for players to really impact a game, he would do so with devastating magnitude.

Although his career on Merseyside might have ended on a somewhat sour note, with Fábio Aurélio’s making his place in the squad uncertain, Arne Riise will always be remembered for scoring thunderous goals that those in the stands at Anfield dream of scoring for their club. His footballing career was one on which he can look back with pride, yet his behaviour away from the pitch gives a real insight into the kind of person he is.

The first example of Arne Riise’s merits as a man as well as a footballer can be seen in his reaction to the infamous golf club incident involving Craig Bellamy. After spiralling into an argument with Bellamy after refusing to partake in karaoke, Bellamy then decided to attack Arne Riise with a golf club after he had returned to his hotel room. In interviews about the incident, he had stated that retaliation had, of course, been something he had considered, but eventually he realised that his career at Liverpool was too important for it to be ruined by escalating tensions with Bellamy any further. Secondly, Arne Riise spoke of a moment where, having just won the Champions League, he encountered a childhood bully now working in McDonalds. Again, there was an opportunity to exact some form of revenge, to arrogantly parade the differences in their fortunes, but instead he opted simply to order some food and smile at the man. Despite producing incredible drama on the football pitch, it is clear that he is a man who seeks to avoid drama in his private life. In spite of being offered opportunities to act with spite towards both Bellamy and this bully, Arne Riise showed that his footballing ability is clearly coupled with a sense of composure, calm and forgiveness about his character. Many footballers are disparaged by the media for their inability to match their talents with even a modicum of common sense, but in John Arne Riise there is a player who ranks as one of the greatest borne of Scandinavia to grace the Premier League, and a man with the qualities that make him deserving of all the successes he achieved.