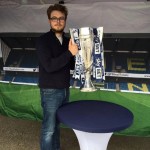 France are the first team through to the quarter finals of the World Cup after edging a seven goal thriller against Argentina in Kazan. Young Kylian Mbappe stole the show as he announced himself at the biggest stage of them all.

Much of the focus was on Argentina captain Lionel Messi but it was Mbappe who showed his class to shift the momentum to the French. The 19-year old PSG forward scored a brace, in the process inflicting further pain for Argentina and their captain who now looks unlikely to win the World Cup in his career.

The French took the lead in the 13th minute after Marcus Rojo brought down Mbappe after he went on a 75 yard charge. Antoine Griezmann stood up and scored the penalty as he did against Australia in the first group game in the same stadium. Argentina came back and levelled with a stunning effort from Angel Di Maria, before going ahead thanks to a fortunate flick from Gabriel Mercado just after half time.

But a sublime effort from Benjamin Pavard brought the French to life as Mbappe scored his double to make it 4-2 to the French, just as Messi and co looked down and out Sergio Aguero popped up with a header to make things interesting in stoppage time but they couldn’t find an equaliser, meaning it is the French that will go through to play either Portugal or Uruguay in the last eight.

Both sides had early free kick chances. Messi was brought down but his free kick came to nothing. Mbappe was brought down at the other end and Griezmann curled his effort against the crossbar. However just minutes later he would go one better from the spot as Mbappe was again brought down, the former took the penalty and sent Franco Armani the wrong way to give the French a 13th minute lead.

Paul Pogba then found the lively Mbappe again as France looked deadly every time they came forward against an Argentina side that dominated possession but created little forcing Messi to drop deep to receive the ball.

It took Jorge Sampaoli’s side 41 minutes to register a shot on target, it was worth the wait though Angel Di Maria shifted the ball from his right to his left foot and found the top corner from outside the box leaving Hugo Lloris with no chance.

Momentum shifted and within three second half minutes Argentina were ahead, Messi with the assist as Mercado with his back to goal fortunately flicked the ball off his boot and into the net. The game then opened up. Pavard then hit a stunning half volley past Armani who had no chance.

It was Mbappe who would change the course of the game once again as he latched onto a Hernandez ball that had broken loose and fired past Armani who will be thinking he should have done better. However, there was nothing he could do about Mbappe’s second and France’s fourth Giroud sending a ball through to the former who fired first time past Armani to make it 4-2.

Messi himself who could end his career never scoring a goal in a World Cup knockout game hit a shot straight at Lloris before providing the assist for Aguero’s header that did beat Lloris in the third minute of added time but there wasn’t time for one last twist.

So it’s France that go through to the last eight, it is the first time in their history that they have made it to successive World Cup quarter finals.

What did you make of the game? Can France progress past either Uruguay or Portugal? Let us know by commenting below or tweeting us at @AllOutFootball using the hashtag #AOF.