Some of the most exciting talents in modern football are fledgling youngsters who are still making the transition into professional footballers who can be relied upon to drive a team to success.  At the same time, every team could do with the mental resilience and experience which can be brought by a couple of seasoned pros, turning a good team into title winners.  While one type of player brings stability, the other gives you creativity and unpredictability.  One does not envy the job of a top level manager who is tasked with finding the perfect blend of the two types of player to give their side the optimum chances of success.

My team, Portsmouth, are currently being forced to deal with a crippling injury list which has meant that the oldest player available for selection for the past two games is a 26 year old centre back.  The average age of the starting eleven for these matches has been 22, while the matchday 18 has had an average age of 19, with eight coming from the club’s academy.  It is admirable to be giving youth a chance, but the lack of experience in the side currently is making it very difficult for the team to pick up results and, I’m sure Kenny Jackett would agree, the situation is not ideal.

At the same time, West Bromwich Albion have the second oldest squad in the Premier League and sit rock bottom of the table, which is not necessarily a coincidence.  The likes of Gareth MacAuley, Gareth Barry, and Ben Foster are unlikely to make too many mistakes, but neither are they likely to win a game with a spark of creativity.  The Baggies seem to be lacking in players who can create something out of nothing, as well as some of the mobility which so often comes with youth.  Even the manager, Alan Pardew, cannot be expected to inject too many new ideas into his players.  Where teams such as Bournemouth who are similar in budget have the likes of Ryan Fraser and Jordan Ibe to create chances, West Brom’s ageing attack lacks the imagination and creativity to unlock firm defences.

It is not possible to be successful with a team made up completely either of young players or old players.  Old players cannot create enough going forward while young players cannot churn out results and keep it tight in defence.  The best sides are those who are able to find the perfect compromise between youth and experience.  Top teams have a pool of youngsters who are able to come in and use their raw talent, while also having a few seasoned professionals at their disposal to make a steadying impact both on the pitch and in the dressing room.  Sure enough, the team currently running away with the Premier League has found that sought-after formula.

Manchester City have an abundance of young talent in the form of Raheem Sterling, Leroy Sané, Gabriel Jesus and others who are making their first steps in the game and can terrorise defences with blistering pace and creativity.  However, they also have players who have a calming influence and use their nous to manage games properly.  Vincent Kompany, Sergio Agüero and Nicolás Otamendi are the wise heads in the City team who make up for the naïvety of some of the younger players.  It is telling that it was Vincent Kompany who scored one of the vital goals in City’s League Cup final demolition of Arsenal recently as the big games are where a club needs their leaders to make a contribution. 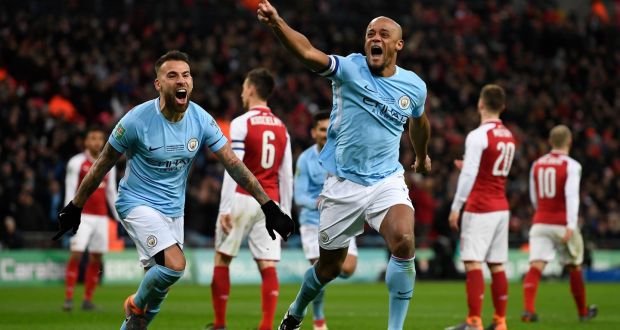 One potential reason for Tottenham so far having been unable to win a major trophy despite their league success is that they have been unable to combine experience with their youthful team and manager.  Harry Kane, Dele Alli, Son Heung-Min and Eric Dier are all in the infancy of their careers yet they are considered the backbone of the Spurs side.  Although they may be able to end their trophy drought in this season’s FA Cup, a lack of a wise head to help the youngsters through could be a big reason for Spurs falling at the final hurdle so often of late.  This is particularly the case two seasons ago when they capitulated against Chelsea, allowing Leicester to claim the Premier League title, and ended up finishing third despite having had clear daylight between themselves and Arsenal with a few games to go.  What was needed in the match against Chelsea was a cool, professional job, but the performance descended into violence.

In conclusion, I would make the argument that a manager’s transfer and selection policy is about more than recruiting and picking the best players possible.  He must find a balance in his squad that allows for quality, creativity, reliability, and experience at the same time.  It is that which truly separates the great managers from the rest.