De Gea to Become Highest Paid Goalkeeper in the World 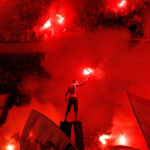 Manchester United goalkeeper David De Gea is set to sign a new contract at Old Trafford, making him the highest paid player in his position on the planet, according to Marca.

After beginning the contract negotiations in early 2018, Manchester United have finally reached an agreement with the Spaniard. De Gea made a poor start to his World Cup campaign, letting a Cristiano Ronaldo shot slip through his fingers as Spain drew 3-3 with Portugal in their first group game.

The shot stopper will earn a massive €21 million per year, which equates to almost £18.5 million, in what is expected to be a brand new 5 year deal. The current highest paid goalkeeper in the world is Bayern Munich’s Manuel Neuer. The German earns approximately €15 million a year but his earnings will be dwarfed when De Gea puts pen to paper on his new contract.

It is no secret that Real Madrid have been interested in the Spanish number one for several years now. De Gea came very close to joining the European champions in 2015 but the move fell through when the paperwork was not completed in time. This new contract for De Gea should put the rumours of a move to the Spanish capital to bed, for now anyway, especially since Los Blancos seem to have turned their interest to Roma’s Alisson and Chelsea’s Thibaut Courtois.

Manchester United boss José Mourinho has been wanting to tie De Gea down on a new deal since last summer. The Portuguese man had a meeting with the owners of the club at the end of 2017 in which he asked for more financial support towards transfers and wages.

Mourinho seems to have got his wish and it will be made official once the only thing missing, De Gea’s signature, completes the negotiations. An announcement will not be made until after the World Cup but United fans can already begin celebrating as their number one stays put at Old Trafford.