Selhurst Park hosted the final Premier League fixture of Gameweek Two with Liverpool travelling to face Crystal Palace. Both sides had won their first game of the season and if Liverpool were to reclaim their spot at the top of the table they'd need to win by a margin of three goals, scoring four. The Merseyside club failed in that quest but did win the match 0-2 against 10-man Crystal Palace with some controversial decisions.

Story of the Gane

Both sides fielded an unchanged eleven from their opening fixtures and Roy Hodgson sent his team out to get an early goal. The hosts put pressure on the Liverpool defence very early in the game but the Liverpool defenders stayed strong and impressive performances from Joe Gomez and Andy Robertson helped keep Zaha and Benteke at bay. Liverpool then calmed the tempo down and played the match at their pace, building up from the back and keeping possession. They started creating more chances and probably should've been 2-0 with Salah and Keita both missing big opportunities. Just before half-time, the former created space for himself in the box and earned a penalty after ex-Liverpool defender, Mamadou Sakho, brought him down. James Milner calmly converted from the spot to make it 1-0 and the score stayed like that until half-time. In the second half, Liverpool came out strong. Naby Keita and James Milner were once again excellent together in midfield with Wijnaldum occupying the "6 role" usually held by skipper Henderson or new signing Fabinho. The midfield three controlled the second half and created a few more opportunities for Liverpool. Palace also had their share of chances but were unable to really challenge Alisson with poor shooting from Zaha and Benteke. Later on, Firmino played a wonderful ball through the middle for Salah to chase, Wan-Bissaka was right behind him and with a clumsy challenge from behind on the edge of the penalty area, the full-back was dismissed. The home side earned a corner in the last seconds of the game and Van Dijk cleared the ball to Salah who outran the second last defender and then set Mane on his way past Van Aanholt, through on goal and he rounded the keeper to finish off the match with a 0-2 victory for Liverpool.

Wilfried Zaha got into a tangle with James Milner and the pair ended up on the ground. Milner was elbowed in the neck and then grabbed by his neck when he tried to get up. The referee didn't see the incident but it was perhaps worthy of a yellow card. Zaha then continued with dissent, whether that was directed towards Milner or the referee was unclear.

Van Aanholt slid right through Milner during the first half and went high over the ball with studs showing. He won the ball but slid through, taking out Milner and the Englishmen's ankle could've easily been broken as it was stuck between Van Aanholt's two legs. A yellow card was shown, which was the correct decision in my opinion, only because he won the ball. 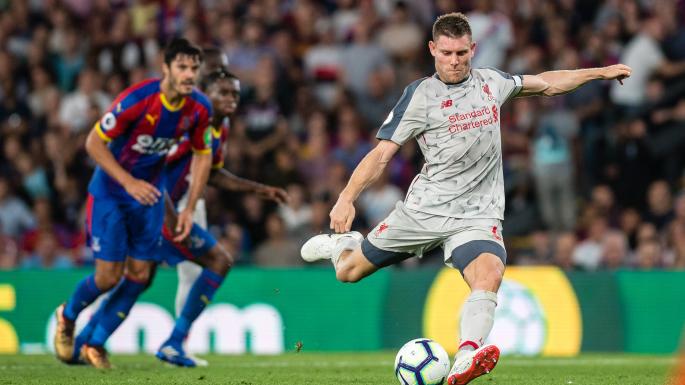 Mohamed Salah was brought down by Mamadou Sakho in the box in the 43rd minute and Michael Oliver awarded a penalty. Salah had his back to Sakho, turned inside and Sakho stretched his right leg out and kicked Salah's ankle twice. The Egyptian was being pulled back by Sakho and the kick on his ankle was enough contact to go down. In my opinion, Salah didn't necessarily have to go to ground, but it was still a foul as Sakho made no contact with the ball and illegally fouled Salah twice.

Some people are saying this one is a dive but replays show otherwise. Salah was sprinting at pace through the centre of the park through on goal. The way his body was shaped and his proximity to the keeper suggest he might not have even been able to get a shot off but Wan-Bissaka was clumsy, pushed him from behind and then as Wan-Bissaka fell over he clipped his left leg with Salah's leg causing Salah to lose control of the ball and then Wan-Bissaka's right knee made clear contact with Salah's left leg. Last-man illegal challenge without playing the ball in a goal-scoring opportunity is a straightforward red card, which Roy Hodgson agrees with. Wan-Bissaka's frustration appeared to be vented towards himself rather than at the referee which also suggests it wasn't a dive.

The Welshmen had a decent performance with some important saves. The penalty is not his fault and Mane's goal was very difficult to stop. He kept his side in the game but at times his distribution was poor.

He did get sent off but played well throughout the game containing Sadio Mane. The red card was justified and was a stupid challenge to make which ultimately cost his team the game as they were 10-men against a superior Liverpool side. 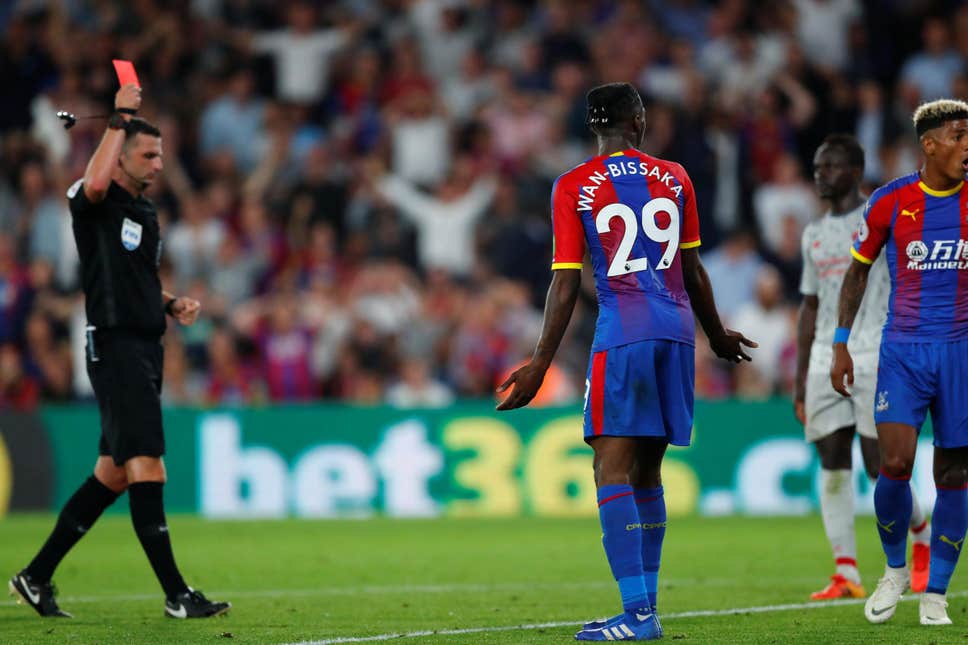 Didn't see him do too much mostly because Firmino was dropping deep and he didn't have to mark him. Neither of the goals were his fault.

Perhaps harsh on Sakho but the penalty cost his side the game. They were challenging Liverpool all the way until that moment and he made a clumsy challenge that was unnecessary. At 1-0 down, Palace then had to change their game plan and allowed Liverpool more space in behind.

Perhaps a poor challenge on Milner in the first half but he did an excellent job against Mohamed Salah. While the Egyptian still get one assist, a penalty and earned a red card for the opposition, Van Aanholt didn't allow him space to get in behind or cross the ball.

Rattled the crossbar early in the first half but didn't do much after that. Needed to make more use of the space when Robertson went forward and he failed to do that. Passing was average and didn't create any chances or crosses for his fellow attackers.

Wasn't a starman for Crystal Palace but he did do well in midfield making sure Naby Keita didn't have the room to create chances. He should've done more to stop Firmino when he dropped deep to pick up the ball.

Same goes for him as for McArthur, didn't help his defenders enough but did well against the Liverpool midfield. He was unlucky with his free-kick but it was a brilliant save from Alisson.

Poor game from a player that had a great opening game. Didn't come into the game and if he, Van Aanholt and Zaha worked together, they could have overloaded the left-hand side and got the better of Alexander-Arnold who was already struggling.

Didn't do anything all game. Gave away the ball, missed a header and ultimately didn't help out in midfield enough. There's a lack of chemistry between him and Zaha which needs to be fixed.

Probably should've done more considering he was up against Liverpool's out of form right back. Alexander-Arnold clearly struggled against him and Zaha should've used this as an opportunity to beat him and cross for Benteke but instead, he selfishly continued to cut inside to try and score himself before Gomez or Van Dijk closed him down.

The Brazilian, as expected, was brought into more action this weekend and was comfortable in dealing with problems when they came. He made a brilliant save to deny both Benteke and Milivojevic and his distribution was brilliant as expected.

The Englishmen had another mediocre game and should've done more in attack. He was good against Zaha and prevented him from getting into goalscoring chances but his crossing was poor and he was criticized by Klopp after the game.

Gomez played with a sense of maturity that shows he's ready to take Lovren's spot alongside Van Dijk. He was comfortable on the ball and demanding of his fellow defenders. He helped Trent out when necessary and was good against the dangerous Zaha and Benteke.

Comfortable on the ball and very good as a leader for his team. He's shown himself as an ideal captain for Liverpool when Henderson and Milner are absent and his defensive performances and intelligence continue to show why he's one of the very best in the Premier League.

Robertson provided an assist for Salah last weekend and didn't have the same impact this week but was good defensively. He was brilliant against Townsend and came inside to support the midfield when Milner dropped deep into defence. His crossing could have been better but his overlapping runs showed his intent.

Another job well done by Wijnaldum as he deputised in the holding midfield role once again. He was composed on the ball and his range of passing is varied. His strength and aerial ability make him a perfect replacement for Henderson and his versatility as any of the three midfield roles or even out wide is perfect for Klopp's system.

Milner continues to look like he gets better with age and another solid performance as captain today proved that. His passing is brilliant and his work rate is phenomenal. Had a tough battle with Zaha, Van Aanholt and others but ultimately got the better of them and his composed penalty capped off an impressive performance.

Liverpool's summer signing has been brilliant in his first two games at the club and appears to be settling in well. He created a few chances during the match and had two chances which he could've scored. He still lacks chemistry with all the attackers but when that develops, the understanding between them will excel Liverpool to the very top.

Liverpool's Senegalese international g0t on the score sheet and provided a few moments of magic throughout the game. He earns an 8 rating for the skill that he plays with and the way he beats defenders with ease. He could be set for a high scoring season and is so far looking the best of the Liverpool front three.

For most players, Salah's performance would earn him a 9 rating but because he's set his standards so high, he'd probably need a hattrick to get a 9 rating. He had a tough challenge against Van Aanholt and failed to capitalise on two mistakes at the back, however, he did earn a vital penalty and an important red card while also assisting Sadio Mane for Liverpool's deadly, last minute counter-attack.

Firmino didn't have his best game and is yet to get a goal in the 2018/19 season but his work off the ball shouldn't go unnoticed. His ability to drop deep and start attacking moves is exactly what Liverpool need but perhaps by signing a No. 10 in the summer, this wouldn't have been necessary.

So Crystal Palace fans, let us know whether you think Mohamed Salah dived or not, it looked like there was clear contact, what do you think? Liverpool fans, how happy are you with the start of the season and do you expect to see a bit more from the team next week? Let us know your thoughts by tweeting @AllOutFootball_ using #AOF #CRYLIV.