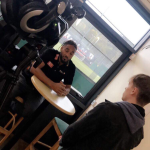 MANCHESTER United pushed Aston Villa closer towards relegation with a 0-3 win at Villa Park thanks to goals from; Bruno Fernandes, Mason Greenwood and Paul Pogba.

Pepe Reina – 6 Was probably Villa’s best player. The veteran made a couple of vital saves to deny Marcus Rashford and Anthony Martial and was the sole reason Villa didn’t lose by six or seven.

Ezri Konsa – 4  Was unfortunate to have a penalty given against him by John Moss, however, the young defender clearly struggled with the overlapping runs of Luke Shaw and the pace of Marcus Rashford.

Kortney Hause – 5  Defended well against the in-form Anthony Martial, but struggled against United’s pace and penetration in attack.

Tyrone Mings – 3  Was at fault for the second goal after losing the ball high up the pitch before failing to close down Greenwood’s shot.

Neil Taylor – 5  Struggled against Mason Greenwood in the first half but improved defensively in the second period, making a goal saving tackle against Martial. Offered very little going forward.

Anwar El Ghazi – 5  Started the game brightly by running at United’s defence but the tricky winger faded in the second half before being subbed early on.

Douglas Luiz – 6 Looked good in possession early on and made some good tackles when Villa were pressing the United defence, but ended up chasing shadows and was overrun in the second half by United’s midfield.

John McGinn – 7  A typical energetic display from the Scotsman and tried to make things happens in the middle of the park for Villa.

Trezeguet – 6 Worked hard for his team and looked threatening against Wan-Bissaka early on but faded as the game went on.

Jack Grealish – 5  The main man for Dean Smith’s men failed to deliver. Often forced out wide or to come deep to look for the ball but wasn’t effective in possession.

Mbwana Samatta – 5  A quiet game for the Tanzania international who was given very little service to work off.

Conor Hourihane 58’ – 6 Was good in possession but entered the game at a time when Villa already looked like a beaten team.

Marvelous Nakamba 59’ – 5  Was dominated by the strength and ability of Paul Pogba and couldn’t influence the game.

Keinan Davis 59’ – 6  Try to produce some decent link up play with Villa’s attackers but was a tough day at the office for the young striker.

Indiana Vassilev 84’ – N/A  Came on too late to have any impact.

David De Gea – 6  Made some good saves when called upon but wasn’t tested much by Villa’s forwards.

Aaron Wan-Bissaka – 7  Looked a bit shaky defensively early on when dealing with Villa’s crosses and missed a glorious chance to get his first goal for the club. However, he grew into the game and helped keep a clean sheet.

Victor Lindelof – 7 A strong and reassured display from the Sweden international who wasn’t really stretched by Villa.

Harry Maguire – 7  The captain led by example and was strong at the back as well as distributing the ball effectively from the back.

Luke Shaw – 8  Reassured at the back and was very dangerous in attack, constantly getting in behind the Villa defence and getting crosses into the box.

Nemanja Matic – 7  Was caught in possession a couple of times early on but offered a strong performance in the holding midfield role, stopping Grealish from making any impact.

Paul Pogba – 8 A dominant display from the Frenchman, who grabbed his first goal of the season with a tremendous curling effort into the bottom corner.

Bruno Fernandes – 7  Not his best performance in a United shirt since joining from Lisbon, but, won the penalty for United which clinically converted to give Solskjaer’s men the lead.

Mason Greenwood – 8 (STAR MAN) The teenage sensation continues to grab the headlines for United. Looked dangerous every time he got the ball and his charging run led to the penalty for the first goal before he hammered home a second for his 16th goal of the season.

Marcus Rashford – 7  Linked up well with Luke Shaw down the left wing and was unlucky not to score when he was denied by an offside Pogba.

Anthony Martial – 7 Was unlucky not to score after rattling the crossbar and having a shot blocked by Taylor. Was frustrated when substituted by Solskjaer due to the fact he didn’t add to his impressive goal tally this season.

Brandon Williams 66’ – 7  Put in some strong tackles to help keep a clean sheet for the Red Devil’s.

Fred 71’ – 6 Kept ball moving in midfield and linked up well with Pogba.

Dan James 79’ – 6  Showed quick movement up front and threatened the Villa defence with a curling shot which was unlucky not to hit the target.

Odion Ighalo 79’ – 5  Didn’t offer as much movement as Martial as the search for his first league goal for United continues.

Do you agree with these ratings? What would you change? Leave your answers in the comments below!