The Most Anticipated Game of the Promotion Chase

Carlisle go into this game with having 1 win out of their last 3, the other 2 being losses, disappointing for a side fighting for promotion. The most recent game was a 1-0 loss against a team lower in the table, Cheltenham. Carlisle held on to a 0-0 draw until the 85th minute when Cheltenhams Daniel Wright headed the ball into the net from close rnage to get The Robins all 3 points. After a run of two disappointing losses this would be a great way for Carlisle to bounce back with a win or a solid draw. Plymouth haven't gone much better in their last 3 though only getting 2 points out of a possible 9. The most recent was very disappointing for the club as a whole losing to relegation battlers Notts County. Argyle lost 1-0 after conceding 20 minutes into the first half after a mistake from the keeper resulted in Jorge Grant going past him and tapping it into the net.

Last time the two sides met was earlier in the season at Brunton Park where Carlisle wrapped up a 1-0 win. Reggie Lambe got the goal for the blues in the 37th minute. 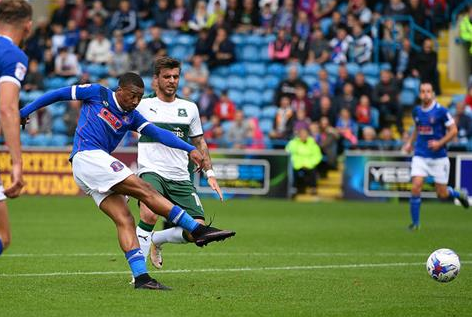 Carlisle remain without defender Michael Raynes (calf) and striker Shaun Miller (knee). Midfielder Jason Kennedy is also still on the sidelines with a groin problem. Captain Danny Grainger looks set to return to the side as he was an unused sub in the game against Cheltenham and manager Keith Curle he's ready to play this weekend. For Plymouth, midfielder David Fox is still out  having suffered an ankle injury against Luton last weekend. Right-back Gary Miller is edging closer to a return to action following an ankle injury  while Conor Smith continues his recovery from an ankle problem.

My prediction is a 1-1 draw or a 2-1 win for Carlisle. I think this because Carlisle are always going to concede a goal especially against a team like Plymouth so it'll be a close encounter but I hope Carlisle can come back up north with all 3 points.